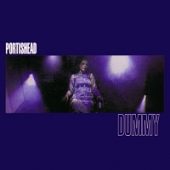 Portishead is one of those acts that I avoided for a long time because someone once told me that they were weird. I am someone who lists Bjork and Kate Bush among their favourite musicians, wrote all of their NaNoWriMo to a soundtrack of The Knife and Grimes, and actually had Father John Misty’s ‘I Love You Honeybear‘ as the first dance at their wedding.

Still. The idea that Portishead was weird persisted and I never really listened to them until relatively recently. Even now the only album of theirs that I have listened to is Dummy. I will need to listen to Third at some point, but Dummy feels like the essential one.

I must have listened to Dummy three or four times in the last 10 years before doing it for this blog. Now that I have more context as to where this fits into musical history (and I have listened to more Massive Attack) I think that I actually get this album a whole lot more.

This is unmistakably trip-hop, just with more of a chill-out and bluesy feel to it and less hip-hop. Because of Dummy’s more dreamy soundscapes it almost feels like you are listening to a film soundtrack. Something neo-noir like Mulholland Drive or maybe a TV show with some mysterious edge to it.

A lot of this mysterious sound comes down to the vocals of Beth Gibbons. She’s like an Elizabeth Fraser you can understand (again, I listened to Treasure by the Cocteau Twins and yet stayed away from Dummy… what the actual hell) and her voice feeds into the swirling jazz samples and record scratches.

Knowing that Third was Portishead moving away from the trip-hop that they helped popularize actually saddens me as it has taken me a long time actually listen and get into them (I seriously love this album but I am not at the point yet where I can nail down a track by name apart from ‘Mysterons’). Still, artists need to develop (hey, look at Bjork’s progression from the house of her debut to the sweeping broken-hearted strings of Vulnicura).

All I can say is that it’s going to be interesting to hear them be more on the industrial side of music.