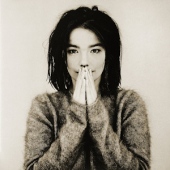 Björk is my favorite singer of all time. There is no ifs, ands or buts about it, Björk is my top singer. I mean, have you heard Vulnicura? It is probably the most devastating break-up album I’ve ever heard. Ended up buying it the very moment I got home from work because I just had to listen to it straight away. Only Sufjan Stevens comes close to her.

I mention this because, since this is a place of honesty, I would not rank Debut as the Bjork album that should be the highest in the list. Still, a Bjork album that I would place 4th or 5th in her back catalogue is still better than the best album released by most people.

So, Debut. A bit of a misnomer since it is actually her second solo album… but that original debut was back when she was 11 and the proceeds went to her buying a piano. So I am not sure whether that should be counted in the canon. Debut marked the beginning of modern Bjork which, in this case, meant her cosying up to the world of house and trip hop. It also marked one of the few instances of a track of an acclaimed album being recorded in the bathroom of a nightclub. As much as I like the song ‘There’s More To Life Than This’ it’s hard not to imagine her singing in front of a bunch of toilets with the seat up.

In terms of obvious highlights you can look at the singles. ‘Venus as a Boy’ is delightfully naughty, ‘Violently Happy’ perfectly captures the feeling of pure elation and then there is ‘Human Behaviour’ which has a fantastic video where Bjork is eaten by a bear. My favourite track, ‘Play Dead’, did not feature on the original cut of the album, but it featured on a reissued version released within a year of the original… so I count it. The strings, the screaming chorus, everything is just epic. It provides a satisfying conclusion to the album.