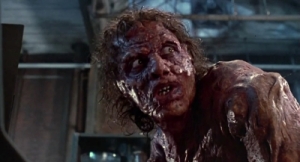 I’m so glad that I watched this without hub. I don’t think that he could have coped with the level of gore. I mean I winced quite a few times, especially when he started pulling his own fingernails out. But let’s not get ahead of ourselves.

The Fly is one of those horror films that I’ve been meaning to see for a while. I would have seen it before, but I only really started to enjoy a horror movies and in the last 6-7 years. It still hasn’t toppled The Thing as my favourite horror film of the eighties but is still a definite 9/10.

I’m really going to be conforming with a lot of critical opinion here, but and how on earth did the Academy not even extend a nomination towards Jeff Goldbloom. I mean, talk about giving your all in a performance that is sympathetic, athletic horrifying. Sure, he got a lot of help with that from the amazing make-up work (the final transformation at the end is just… wow) but it’s an outstanding performance. I also have to give major props to Geena Davis as that could not have been easy to play against. I wonder how much of the terror on her face was spurred on by legitimate disgust.

Before The Fly the only other films I had seen by David Cronenberg was Naked Lunch, which meant that I was prepared for some of the disgusting visual effects. There’s this one bit where the Geena Davis character has a nightmare after becoming pregnant with baby of Goldbloom’s scientist. She has no idea if this was before or after he began his transformation so OBVIOUSLY she fears the worst. All I can say is… I have had similar nightmares so that may have made it extra horrifying for me.

I felt a mixture of disgusted and invigorated upon the film’s conclusion. It’s not something you want to watch before having your lunch… but it’s definitely one of those essential horror films that people should see.

There are two more Cronenberg films left on this list (Videodrome and Dead Ringers). I have things are only going to get gorier and more bizzare. 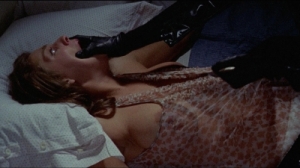 Okay so this is a bit of a tenuous link, but here we have a second horror film. This time it is the directorial debut of Dario Argento: The Bird With The Crystal Plumage. I have to say that whilst some of the atmosphere generated in the second quarter was palpable the film was ultimately ruined by the fact that it was so easy to work out the murderer.

I don’t know if it’s because I’ve watched a lot of television procedural dramas and crime films, but I worked it out within 5 minutes of the arrest of the protagonist. That usually does not ruin a film that I feel has a lot of other things going for it have however this is a film that started to bore me.

Since it was so obvious that neither the protagonist not his girlfriend would be killed at any point in the film (a realization probably due to watching too many films) there was no tension. At all. In fact, it was hard to warm to any the characters involved. I mean why did this writer even get involved in the case? Apart from the fact that the Italian police were basically blackmailing him through the withholding of his passport.

Since I have heard of Argento I really expected there to be a lot of gore. As in orange – red thick corn starch style blood. Alas it was not meant to be. There was not even a moment where I cringed in the slightest.

I do wonder how I will get on with Suspiria once I get around to seeing it.