So continueth the dictated film reviews! Damn these wrists! 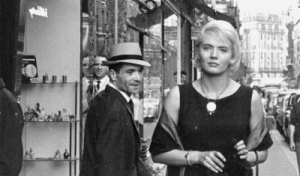 Perception. It is amazing how the way others/society perceive us has a direct impact on how we perceive ourselves. Having watched Cléo de 5 à 7 I found myself looking back on three films that have made an impact on me:  A Streetcar Named Desire, Jeanne Dielman and Before Sunset. They all come to mind based on different parts of the film. The fact that I’ve been reminded of three films that I adore probably demonstrates what I think of this film.

So let’s go through the three films in order. The link to A Streetcar Named Desire is a line that Vivien Leigh says: I can always depend on the kindness of strangers. As we start Cléo de 5 à 7 she is incredibly anxious about an impending set of medical tests. For the first hour or so she is pretty much beyond consolation. Why is this? I don’t think it helps when everyone in your circle refers to you as spoiled. It is only when Cléo meets a stranger who knows nothing about her that things don’t look as bleak.

This leads me onto Before Sunset. Like Before Sunset, this film is shot in real time. As with all films that choose to shoot in this way great editing and dialogue are essential. There is a bit of a dip around the 40 minute mark, the that is to be expected as this is a very hard way to do a film. However, thanks to a very charismatic lead a truly fantastic and final 30 minutes you easily forget everything that preceded it. The link to the Before… films is further cemented by the beginning of a love story.

I have been subjected to a lot of romantic films for that is a lot of a gay man with female friends. However, there are few films that have as romantic half hour as the final 30 minutes of Cléo de 5 à 7. Antoine is exactly what Cléo needed at the time. He is compassionate, non judgmental and a real chatterbox. I have to admit I started for the for him slightly. It’s one of those meetings that films of try to sell us as real life that we all know is the stuff of fairy tales. The way that Agnes Varda sells this with her direction makes it seem like it could really happen.

This finally brings me to Jeanne Dielman. Both of these films from directed by women and have a woman as their focus. The type of women they pick her very different backgrounds, but are both directly affected by society’s view on how they should be. Apart from Antoine all the men in Cléo’s life do not take her seriously and think that she is feigning illness for attention. She is also constantly reminded by the women around her about the best ways to treat a man. There is never any thought that at this point in Cléo’s life she may not need a man.

Cléo also keeps repeating the idea that “beauty is life” so as long as she remains beautiful she cannot die and will be loved. It’s a tragic point, but this idea is one that still remains to this day. Is Cléo a strong person? Probably not as strong as other female role models then again this cancer scare is arguably the first time she’s really been tested. Also – I would probably be exactly the same as her if I were awaiting results that might tell me the worst. And she is not a hypochondriac, as the doctor clearly addresses her as someone who knows they have cancer but not how virulent it is.

Clearly this film gave me a lot to think about and thanks to this fucking awful excuse for vocal recognition software I have spent an hour writing this.

The first thing that I have to say about this film, is that it really has been a long time coming. Prior to watching this the only things that I knew about Bonnie and Clyde were gleaned from pop culture references and the obvious parallels in the film Gun Crazy.

The tagline of Bonnie and Clyde reads: “They’re young. They’re in love”. It’s probably one of the most famous taglines in cinematic history and was the genius marketing move by the studio. Because of their pop culture status, due to general notoriety, it was a clever way to ensure as many people got to see this as possible. To be honest, it makes it sound like a date movie.

The Oscar ended up going to In the Heat of the Night in 1967. It’s a really good film and, in terms of how race is depicted in films, it was a very important one. Bonnie and Clyde has their own importance to it before it was one of the first major New Hollywood picture. It would go on to inspire many of the great American directors and the ending broke new ground in how to depict violence. It was also against The Graduate, which demonstrates how good a year this was (I am willfully ignoring the Best Picture for Doctor Dolittle).

Still, despite the fact that this broke ground for violence this film still feels slightly sanitised. A lot of the history surrounding Bonnie and Clyde is omitted such as the repeated sexual assault that Clyde had to endure whilst in prison. I know there’s only so much you can do in 100 minutes, but it would have provided a decent explanation for why Clyde was unable to have sex with Bonnie. There is also the rumour that he was actually gay — but let’s not start on that.

Faye Dunaway and Warren Beatty have real chemistry in the roles of the titular rogues. I can see why they did not win Oscars for their performances, but still they were able to sell it. Also, Faye Dunaway was absolutely stunning. Warren Beatty wasn’t too bad either.

Now I’m gonna take umbrage with the only acting Oscar going to Estelle Parsons the her role as Blanche, Clyde’s sister in law. Firstly I am not buying that this character was so unwilling. In the end she ended up in jail for robbery and murder after singing like a bird after she was called. Putting that aside she was so incredibly annoying. There was part of many that was wondering when Bonnie would shoot her in the head.

It was enjoyable film overall, but as with a lot of these big Hollywood classics there was a slight part of me which was expecting more from this film.