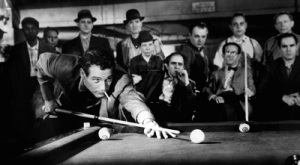 I have been sitting on The Hustler for a few years. When I got so far behind on films from the 1960s, many of them were New Wave or something that I didn’t think of as sure things, so wanted to make sure I tore through those before getting to what I assumed would be a surefire win. Paul Newman in his gorgeous prime in a BAFTA Best Picture winner with Piper Laurie and Douglas C. Scott seemed like a good watch for a lazy Monday afternoon.

Thing is, despite the very high public and critical opinion, I was pretty bored throughout most of the film. I think I overestimated how interested I would be in a film about a pool shark that is over two hours and how much Paul Newman’s charisma could carry me through. I’m not denying the performances and the spectacle of seeing so many trick shots, but it was just too long for the film it was trying to be.

What also didn’t help is that, at the centre of it, is a guy who is just a bit of a prick. Sure he’s a conman, but so many cool characters can do that whilst being likeable and easy to support. With this film, I just couldn’t help but feel that he got what he deserved with that initial loss and afterwards he was just a proud idiot who took advantage of a people in order to satisfy his ego.

It sucks when you look forward to a classic film only to think about giving up part way through. I guess that the high critical opinion and the way that that show a bunch of the trick shots are the reason it is on the 1001 list, but for me it just didn’t work.