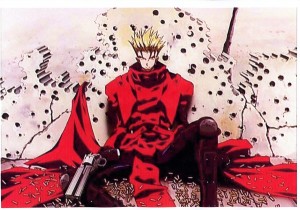 First post where I’m checking off something from the new anime list, and I am still feeling really good about the switch. So many great and famous series to choose from and, due to it being one of the view being available and downloadable on Netfix, Trigun ended up as the first pick. As it stands, Trigun is the first anime series that I started watching in a foreign country – the first episodes being watched on the flight between Taipei and Hong Kong.

Trigun is one of those rare series that, having been lukewarmly received in Japan, found huge success in among Western audiences. As a space western with English character names it’s little wonder that we lapped it… I mean look at the loyal following that Firefly was able to inspire.

Now Trigun isn’t like Firefly… other than by being a space western featuring a desert planet that has been colonised by humans. For one thing, the central figure Vash the Stampede is just way too good. I know that he’s an incredibly popular character in anime – and I do love the back story that he was given – but he’s so good at times that it borders on insufferable.

This is a man who, despite having people after him who wish to see him dead, refuses to kill – even at the point where those he love are in terrible danger. I’m not saying that I want a lead character who necessarily enjoys maiming people, but he just cries way too much (again, I know he’s had a rough and interesting background).

One thing that probably did not help Trigun, at least for me, is that a lot of the backstory was lost in order to fit the manga into 26 episodes. A lot of the villains that appear, just seem to disappear too quickly – something that I don’t imagine happens in the manga. It’s a shame really as the world that is constructed for Trigun is extremely interesting and I don’t think that this anime best served the original vision.

That being said, I did enjoy watching this. It’s just that I feel that this could have been so much more if it had been given more time to fully explore the original material.