Today begins and pretty much ends at Mandai. An area in the north of Singapore that is home to:

That’s right. As the title of this post suggested, today was a zoo day where we spent time in, and got to know the residents of, three different zoos in Singapore. The Lonely Planet only mentions the first main zoo as part of the countdown, but since they’re all right next door to each other… why not just buy a multi-park pass and see them all in one day? I mean, that’s what we did and I think we made excellent use of those 11 hours.

Still, you don’t start an all day zoofest without breakfast, so we tried some kaya toast. Seems like one of those regional things and is, essentially, toast with salted butter and some sort of coconut jam. It’s nice, although this could have had more kaya on it for my liking.

Anyway, time to enter the first zoo of the day: Singapore Zoo. Before going in I did have a flash of worry about what if it was more like Himeji that San Diego. This worry quickly melted away when I saw the first animal – a monkey that had been taught to stay in certain clusters of trees, but otherwise had free reign. 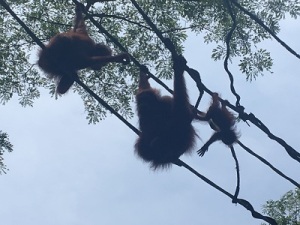 This became a common thread throughout the zoos with many of the primates being able to freely move in areas outside of their main enclosures. Quite amazingly, this same freedom was given to their group of orangutans who, whilst having a central island enclosure, also had many ropes to clamber about the place. Thanks to this we were able to watch a mother teaching her baby to climb, as we stood underneath looking up. Sure, we had to jump out of the way when the baby went to the bathroom, but it was still cool.

It’s also fair to say that even the animals without such free rein as the primates are still incredibly well treated and have enclosures that make great use of the beautiful jungle setting of Mandai. The elephants are especially well treated and we were lucky enough to catch the keepers interacting with them after the daily feeding show.

Other highlights of this first zoo included some time with the baby Pygmy hippo and a fantastic walk through called Fragile Rainforest where you were immersed in an enclosure with toucans (and other birds), some flying foxes, some local rodents and a rather photogenic sloth.

So this was a great start to the day and it was time for a late lunch at one of the places just outside the zoo. As I wanted to remain of the area (i.e. no hot dogs) we had some fried noodles and…

Yup, I found a fruit from my list! This might be the only one I end up getting as I’m not having much luck in finding unusual fruit of this region like salak, but still this is still a win and provided a delicious accent to this chenol that we shared for desert. I’m not entirely sure if I get the inclusion of kidney beans in a frozen dessert, but I sure do love the syrups that they added.

After this it was time for the River Safari. Whilst not as large as Singapore Zoo, because of the river focus, it still has some real big ticket animals on display.

Me being me, the real highlight of this visit was the manatee tank at the end. I have a minor obsession with manatees, which meant that I spent about half an hour sitting at the tank and just watching them gracefully swim around. Also, there was a baby manatee there which we saw interacting with their mum. Seriously cute!

Also on display are Singapore’s two pandas (which means that between this, Tokyo and Vienna, I have now seen six pandas) in a special enclosure next to the red panda (who I swear was on cocaine). I do love pandas, even if they are a ridiculous animal. 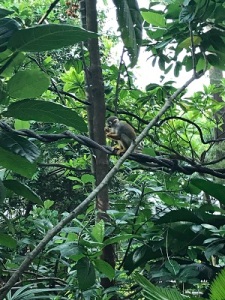 There was also an immersive exhibit containing spider monkeys and mara. I’m loving that this zoo sets up opportunities to get this close to the monkeys. Also the mara, who I want to adopt immediately as they are like a small capybara mixed with a rabbit.

Finally, we did one of the River Safari boat rides, which allowed you to pass by a number of different animals from the comfort of a boat on a track. Honestly, we weren’t going to do it because it could have been a little bit lame, but it was well worth the time.

By the time we left the River Safari it was only an hour before the Night Safari opened, so we bought our souvenirs and got in line for the tram ride… after the downpour stopped. I know that it is meant to rain hard in Singapore, but wow that was a lot of water.

As the name suggests, the Night Safari is a zoo that only contains animals that are active after the sun goes down and is only open between 7pm and midnight. This means that my photo taking was pretty much reduced to a minimum, but we make do.

The first thing we did, which is the same as nearly everyone, was take a ride on the park tram. It’s a cool way to showcase as many animals as possible, keeping in mind that the lighting is limited to what what would be expected during a full moon. Some animals (such as the tapirs) could only be seen via the tram ride, so this really is an essential part of any visit.

Even if you don’t do the tram ride you still have the chance to see about 70% of the animals in this zoo. Since it is dark, everything is done along a designated path and your ability to see a number of the animals comes down to a bit of luck. Sadly this meant that I was unable to see the tarsiers or the flying squirrels, but we managed to get good views of the hyenas, babirusas, servals and other nocturnal creatures.

Of all the animals in the Night Safari the highlight for me was the wallabies. Mainly because we were there at the same time that the keeper was doing some training with them and we got to know more about the individuals in the enclosure, plus we also has pointed out to us a wallaby who was expecting!

So by the time we left the Night Safari it was super late and, rather than take the long way home via public transport we took a taxi, where we paid both with money and with awkward laughter to some awful dad jokes.

Still this was an absolutely excellent day. It’s a lot of zoo-hopping, true, but that’s never a bad thing if they’re so close together. More rain is forecast for tomorrow, so I guess we’ll see what we end up doing.