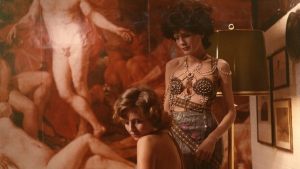 After devouring two Fassbinder films so close to one another back when my wrist was busted, it’s been nearly two years before I watched my next one. It’s all part of the whole pacing thing I have to do to ensure that there is always something left to watch that I’m looking forward to. Guess that means it’ll be another two years before I see Fox and his Friends, which is a shame as The Bitter Tears of Petra Von Kant was another 9/10 film for me.

Based on Fassbinder’s play of the same name – The Bitter Tears of Petra Von Kant is a four-act tale on sadomasochism and co-dependency masquerading as a lesbian love triangle between a fashion designer, her assistant and an aspiring model with the whole thing taking place in the bedroom of the titular Petra Von Kant.

The transition from a play to cinema can be difficult, but Fassbinder does it with ease. We get clues of it’s origins from the very dialogue-heavy scenes, the single set and the limited number of cast members – but that just adds to the claustrophobic nature of the relationships between the three women.

Carrying the film on her shoulders in the title role is Margit Carstensen who is absolutely outstanding. Being at the centre of the psychologically damaging triangle, she needs to be sadistic, co-dependent and abusive to her mother, daughter and best friend… yet you still have to like her and by the end of it your heart breaks for her. Now consider that she had to do this back in 1972, when homosexuality was nowhere near as accepted as it is now (it was decriminalized in West Germany just three years earlier in 1969).

Then you have Irm Hermann as the silent (and verbally abused) assistant Marlene (or is she another designer… it’s never made completely cleared, probably because it never really matters). Whilst the costumes and hair changes with every act to reflect the emotions, Marlene remains in the same black number with the same make up with the orders barked at her getting crueller and crueller. She is such an enigma in this film until the final scene where suddenly her place is revealed and it takes a while to let it sink in.

I’m not sure where this sits in my internal Fassbinder rankings next to Fear Eats the Soul and The Marriage of Maria Braun but what I do know is that his is a filmography that I will need to experience more fully once I am done with the 1001 list. At this rate, that likely to be in 5 years time… at which point I really will be cinematically rudderless.