Despite this being my fifth post about my time in Taipei, I think this is the first time that I had a proper time exploring different parts of the city. Probably should have had this a bit earlier in the itinerary, but that’s just how it happens sometimes.

Breakfast was a quick grab on the way to the MRT station. For them past few days I’ve seen someone selling some great selling fried meat buns and, finally, got the courage to go and buy a beef one for breakfast. Nice, hot and peppery – exactly what I needed to start off the day. 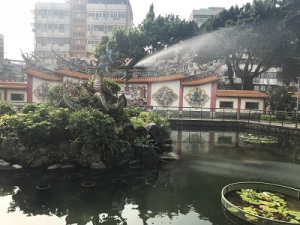 We headed north on the red line to Yuanshan Station to get some proper temple time in. There are two big ones in the area that area handily next to each other. Since one of them opened at 10, the choice was made for us to first go for the Baoan Temple. Before that, however, was a visit to the temple’s gardens with its dragon fountain and other sweet models mixed in with the well maintained plants.

After a turn about the garden, we entered the Baoan Temple itself. There was clearly something going on today as there were a lot of food offerings being prepared, but I have to hold my hands up about my ignorance of Taiwanese folk religions. In terms of look, this has to be the first time that I have seen an East Asian temple featuring so many paintings. This was in addition to the dragons and other wonderful carvings that I have come to expect from these kinds of temples.

From here it was a quick walk down the road to the Confucius Temple complex, which is part temple and part museum explaining Confucianism (something I appreciated as I only really about it from my games of Civilisation. Since this had more of a museum feel to it, there was more freedom to have a proper wander around, point things out to each other and take a few photographs of the Pan Pond, gates and the central Dacheng Hall. We also learned a bit about the changes in form of Chinese characters, which was interesting.

It isn’t just the temple where Confucianism is found in this area. Outside of the complex there are a lot of cute bear statues. There’s a set with the classical see/hear/speak no evil post, but my favourites were the six depicting the six main tenets of Confucianism. I kinda wish a smaller version of these were sold in the gift shop as some of them would have been perfect for my desk at work.

We then ventured back to the station and, on the other side, entered the Taipei Expo Park – set up in 2010 when Taipei held an international gardening and horticulture exhibition. Now, when we entered from the Yuanshan Station side we had no idea just how huge is park was. 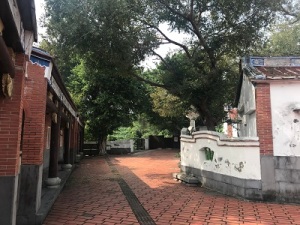 By the time we left the first part, which we thought was the whole park, it was a little disappointing – not least because the flower landscapes were either out of season or no longer in operation. Although it is worth mentioning the number and variety of bird species that live in these parks. I swear I haven’t heard such a cacophony of bird calls in any city that I’ve visited before.

However, before we had a explore of the coolest section of the park (sadly not the pavilion on the indigenous peoples of Taiwan as that was closed), we paid a visit to the Lin An Tai Historic House. This is an actual private house and garden built based on the concept of Fung Shui – that was relocated and rebuilt in its current spot.

Keeping in mind that this faces a large road and is in the middle of the city, the sense of calm and peace you get here is otherworldly. They’ve also done this thing with there being 9 stamps around the house and gardens and, when you enter, you can collect them as you explore every nook and cranny. Made for an interesting impetus to not leave any corner of the house and gardens unexplored – oh and the whole thing was free.

We then got back to exploring Taipei Expo Park with a visit to the only open pavilion that we could find: the Future Pavilion. This, again free, area was a series off indoor gardens containing plants from different climates – which meant some much desired air conditioning.

Right so this was a welcome surprise and makes for an interesting thing to cross off of the bucket list. I’ve done a hedge maze once or twice in the past, but I wouldn’t be able to tell where and when. Thus, when I saw that there was a hedge maze in this section of the park, it felt like destiny. It took less then 10 minutes to do and we both had a lot of fun completing it – the touch about having to cross set open areas with mosaics kept it interesting. As you can probably tell from the photo, I beat my husband. 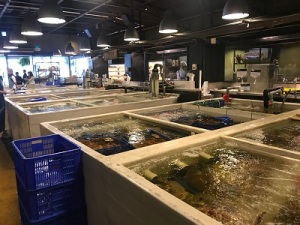 Time was marching on and we were getting hungry. I’d read a lot on the web and in a few guides about a really good place next to the Taipei Fish Market called Addiction Aquatic Development and thought this would be the perfect time. It’s more than just a restaurant, but also a place where you can buy gourmet ingredients and some live seafood of your own if you felt so inclined. Me, I had my eye on the prize.

List Item: Try as many of the 1001 Foods You Must Try Before You Die as possible

Just to get this out of the way – this crab cost the equivalent of £50. I hadn’t been quite expecting that we’d need to buy a whole crab, but we’d reached a point of no return and this isn’t something you can really get in the UK. My poor husband didn’t know what to do with the implements we received, so I got my hands dirty with a lot of cutting and crushing – which was more than fine by me. It also gave me a first hand chance to understand the crab’s name – it actually feels like it is covered by soft hairs! Not going to lie, I stroked my dead crabs limbs for a bit too long.

As someone who has historically liked crab, I was really concerned about kissing away. £50 like this. Shouldn’t have worried, this crab tasted exquisite and there sure was a lot of meat to find. I finally get the idea of crab tasting sweet, especially in those claws. The leg meat was firm, not too stringy and had such a subtle flavour that I’m glad that we only had this with a squeeze of (green) lemon. We also enjoyed some of the tomalley, but it really was too rich to eat too much of. This might inspire me to give crab more of a go in the future, but maybe at a cheaper price tag.

It took us about 40 minutes to finish off the crab so we had to shift some stuff in the itinerary in order to beat the setting sun. We made our way south on the red line to Xiangshan to something rather ill advised for when you’ve been on your feet all day – climb a whole bunch of stairs.

The stairs themselves belonged to the Xiangshan hiking trail, which takes you up Elephant mountain so you can get a spectacular view of the iconic Taipei 101. I’m not exactly the fittest person, but I felt gratified that I was beating a lot of thinner people up these steps; even if I was absolutely dripping by the end of the climb. Keep in mind that it was humid and nearly 30 degrees. 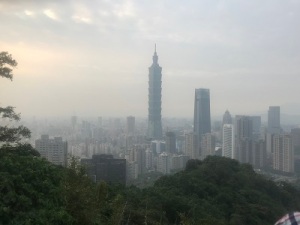 Sadly it was hazy, as it had been all day, but it sure was gratifying to get a super view of those stacked noodle boxes. Seriously though, this might be my favourite looking building in world and is the reason that a visit to Taipei entered my mind in the first place. Time to go up it don’t you think? 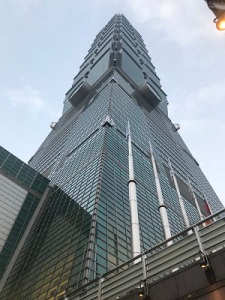 For a few years this was the tallest building in the world and for a few years after that it had the fastest elevators – the journey up to floor 88 taking just over 30 seconds. Pat the time we got up there the sun was just finishing setting, which meant that we got to see the view at dusk and at night. Sadly the haze limited the view somewhat (just like with Tokyo Skytree) but I still got a real buzz of actually being inside and looking out over the city. 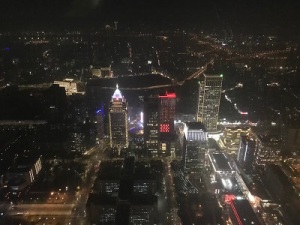 To be honest I didn’t want to leave, but all we’d really eaten today was crab and it was time for dinner. So we paid a visit to the big wind damper as we made our way down and out of Taipei 101. Even a few hours later as I write this, I can’t quite believe I’ve been inside that building.

A bus ride took us to our final destination of the day: Roahe night market. Whilst this is not as big as the night market at Shilin, this might have had the best mix of food and other stalls (although there was still a lot of stinky tofu around polluting the air space). 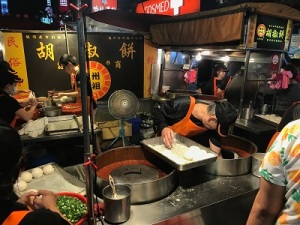 Upon entering we immediately got in line to have some of the famous baked pork buns. The wait was truly worth it, those were some flavourful and juicy pork and green onion buns. In a way, these made me think that these are like the Chinese cuisine version of Cornish pasties – just with less vegetables and a lot juicier.

This was followed up with some Taiwanese fried chicken steak (which was delicious) and a Chinese sausage on a stick (the hub misunderstood the vendor and tried to take his off then grill before they were ready). As the hub doesn’t eat chicken (apart from the bites I offered him) he had two of those sausages and a peanut ice cream roll. We ended the visit with some souvenir shopping and a juice before getting on the MRT back to the hotel.

A lot in a day right? This will likely be the busiest day of the holiday and, boy, are there a lot of good memories. This trip to Taipei is shaping up to be one of my big top tier holidays. Let’s see what a rainy Friday can bring.