Never let it be said that we don’t pack things into a day on holiday. So many things done today that it really feels like a day of two (rather different) halves. 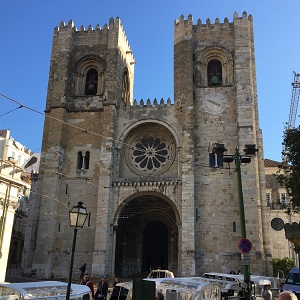 We started out by heading for one of the three Lonely Planet Travellist places that I am hoping to hit up on this trip. Our walk took us first to Lisbon Cathedral, whose presence was absolutely massive amongst the surrounding smaller houses.

Inside it is a bit barer than some of the other cathedrals I have been to recently, but there are still some really impressive architectural aspects. To get into the main cathedral is free, but if you want to venture around the cloisters and treasury there is a 4€ fee. 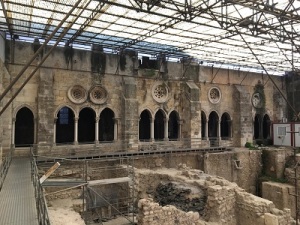 Well worth it just to know that the money is going towards the upkeep of the cathedral and the archaeological excavation currently happening on the centre of the cloisters. Already they have been able to find old Roman and Islamic remains. Who knows what else they’ll find.

The treasury is worth it just to be able to get the view from above the cathedral. Never have I ever been so close to a stained glass window that I could make out such a wealth of detail. It made me wish I knew more about the saints and their symbols to better identify them. Hey ho. 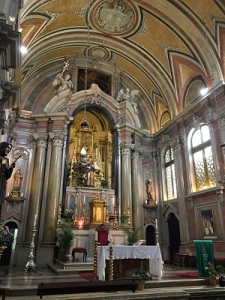 We went across the road to the Church of St Anthony. I think this is the first time that I have been to a church build on the birthplace of a Saint. As you can probably guess, that meant this church had its fair share of pilgrims making their way to the crypt to say their prayers before buying things from the gift shop.

As for us we were able to enjoy the opulent decorations on display in the main church. Gold, gold, gold as far as the eye could see. Also the desiccated corpse of a young Saint Justina. The second time, after Catania, where I have seen a dead body on display in a church.

So here we are in the first of the Lonely Planet Travelist areas in Lisbon. Alfalfa is an area of Lisbon characterized by winding streets, colourful buildings, lots of little shops and quite a few churches.

It’s hard to just to talk about an area like its a landmark, but it was just such a pleasure to walk through its streets and take in the surrounding as we went higher and higher.

At the top of the hill, and I think technically out of the Alfama, is the Castelo de São Jorge. At the top of one of the towers is, as we overheard from a guided tour, the highest point in Lisbon.

This is another one of the places where you could just spend a wealth of time taking in the views. We did take our sweet time in the castle grounds just looking at as many different views of Lisbon as we could find.

The castle itself was large and impressive. Just reading up on the age of some parts of this castle (we’re talking 12th century here, with the hill having been occupied since 4th century BC) just makes you feel humble. That is until you find yourself hugging walls as you clamber down steep stairs whilst singing the New Girl theme song.

This was the end of the first half of the day. The middle was characterised by getting annoyed at the Lisbon bus system after buses just didn’t arrive when they were meant to (as in we waited for 40 minutes and the bus that was meant to run ‘every 15 minutes’ just didn’t materialise… we later found out that the road was closed for works some 100 metres away) so let’s skip on through. 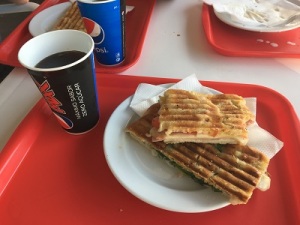 Lunch was at about 2pm in the cafe attached to the Lisbon Oceanarium. It was here that I somehow managed to tick off a food item since they used sweet marjoram in one of their sandwiches. It just goes to prove that you never really know when you are going to come across one of these. Maybe Lisbon is just a treasure trove of these.

A quick lunch later and we were in the Oceanarium, which is apparently the largest indoors aquarium in Europe. It was also magnificent. 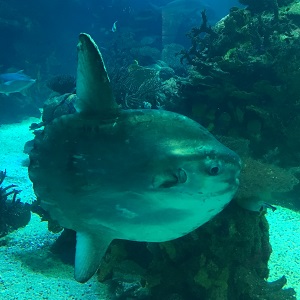 The whole thing is centred around one large ocean tank that contains my new best friend: a sunfish that I have called Derp. There are other things in there like devil rays, groupers, sharks and guitarfish; but Derp is truly the magnetic presence of the tank. Okay maybe not, just watching the fish was enough, but actually seeing a sunfish in the flesh was something truly special.

There are a lot of other exhibits in the aquarium including penguins, puffins, otters, jellyfish and a whole wealth of other creatures. Seriously, this is an impressive aquarium to visit and (thanks to it being a Thursday in the off season) it was actually rather quiet. It meant that we could just take our time and take pictures of our favourite fish.

We wandered through the Parque de Nações before taking the metro back home. This park, which was the location of the 1998 World Expo feels so wonderfully modern. So many interesting looking buildings and sites that kinda reminded me of Odaiba.

Dinner was further proof of the wealth of 1001 foods available in Lisbon. It was not a place that I would have normally gone in, but TripAdvisor and a pre-visit glance at the menu persuaded me that it would be worth the visit. 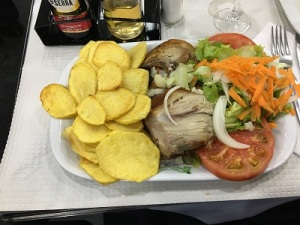 To help me with the ticking off (as well as ensuring he got a good meal) hub went for the sucking pig. It was a mountain of pork like I had not expected for 11€. In the UK you would probably have to pay 2-3 times that.

Now, on one level I disagree with the concept of sucking pig wholeheartedly, but my god was this good. So very tender they it just collapsed off of the bone. Also, as pork goes, it was a sweet meat. This is a good thing. 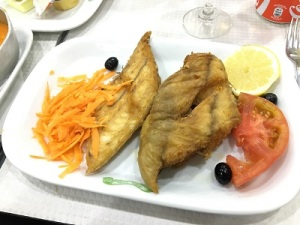 So, the waiter tried to warn me off this. Like he actually told me what this fish looked like and that it basically wasn’t a normal fish. I got a “don’t complain if you don’t like it”

I did not complain. I adored this. It was some of the best fish I have ever had and I can’t think of what I’d compare it too. Perhaps eel would be closest, just not as oily. It was very close textured and slightly salty.

I would have this again. And might do if we find it in another place. Or just visit this place again. Usually a no no for me on holiday, but there are a lot of other things I want from this menu.

This was not the end of the food items today. Oh no. We actually managed to pick up some Brazilian guarana soda on the way home! I hadn’t really thought about it , but it makes sense that you could get some Brazilian things here. It tastes like a refreshing tropical berry that’s like a nicer version of Red Bull. That’s about it, I have no other touchstones for this..

So that’s today. This may be one of the longest blog posts I have written for a good while. Time for bed so I can be up early tomorrow for our trip to Sintra!