List Item: Listen to half of the 1001 Classical Works You Must Hear Before You Die
Progress: 105/501 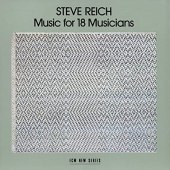 Music for 18 Musicians is a bit of an odd one. This is the only album that I have found, at least so far, that is on both the classical and popular music list. I guess it’s one of those things where it shows how these two worlds do touch one another. In this instance, this is where we have minimalist classical music that apparently crossed over so much that it ended up on best of lists in major music publications.

Listening to it was very much like listening to Reich’s Different Trains in that I am seeing how much the term of classical music is being stretched. There are some more regular classical instruments here, but also you have voices being used like notes on a keyboard and some interesting variation in percussive instruments.

Unlike a lot of classical pieces or popular music albums, Music for 18 Musicians comes as just a single track on the 1978 album – although other recordings of the piece have been split up into smaller tracks. It being together as one large piece does work, although there are times where I would like a signal as to far into this hour long track I am. However that’s probably just my stupid attention span.

Listening to this, the thing that came most to mind was the closing track ‘Out of Egypt, into the Great Laugh of Mankind, and I Shake the Dirt from My Sandals as I Run’ from Sufjan Stevens’ Illinois. I will probably also hear echoes of it in other more instrumental works that are in the ambient and lo-fi styles.

List Item: Listen to half of the 1001 Classical Works You Must Hear Before You Die
Progress: 16/501

Having spent so much time in the earlier parts of the classical music list I really wanted to balance things out by picking something from the most recent pieces. It’s one of those weird oxymorons that, somehow, make perfect sense – recent classical music.

Why did I pick this one in particular? One reason: Kronos Quartet – the performers of the Requiem for a Dream and The Fountain soundtracks as well as a cool Bjork remix on Telegram. They are one of THE classical groups and they were the original performers of these three movements by Steve Reich.

Having gone straight from 15th century Maters to this makes for a stark contrast in terms of technology. Different Trains is not just a piece for a string quartet, but also for cassette tape. The piece samples train whistles, sirens and speech with the latter actually providing an initial melody that is spun off and developed by some members of the quartet (whilst the others maintain a pace that mimics the changing speed of a train).

The use of sampled voices isn’t unusual in music, but this was one of the first major classical pieces to use it. However, the voices also have a thematic use related to the idea of the ‘different trains’. The people speaking relate to different journeys. The first movement are Americans talking about journeys across the US, the second and third are Holocaust survivors whose train journeys are to and from the concentration camps.

Once you get the background to this piece the second movement becomes incredibly emotional and, ultimately, upsetting. The idea of making a classical piece that is able to mimic the intensity of these train journeys is inspiring. Honestly. It makes me wish that Steve Reich had worked to provide music to some of the sequences in Shoah.

The third movement is possibly the most jovial of the bunch since it symbolises freedom and those rescued from the camps riding the rails back home. Listening to all three movements a second and third time really helps to cement what the composer was intending to do.

Truly this is an evocative piece. Makes me so glad to be doing this list.