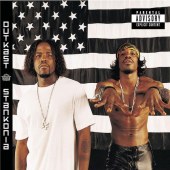 Well, it is most certainly the first weeks of the new year. If the cold weather wasn’t enough of a clue, I am becoming somewhat prolific in crossing off these acclaimed albums in a time where I am not yet thinking about making my way through albums released this year. I technically was due an album from the 1990s, but I just a hankering for OutKast thanks to them being a clue on a recent episode of Only Connect.

When I started this blog, OutKast had two albums in the list. Speakerboxx/The Love Below has since fallen out, which was a bit annoying as that’s the only OutKast album I’d actually heard before. Still, Stankonia was still around in the list’s mid-section – so that means it had to be good right?

Yes. Yes it is. It’s probably a better album than Speakerboxx/The Love Below even if it doesn’t have the crossover sensation of ‘Hey Ya’. What is does have, however, is ‘B.O.B.’. The moment it started I got a serious Janelle Monae ‘Cold War’ vibe from it – and little wonder, this song was a major inspiration for one of my favourite songs of all time. It’s absolutely astonishing to think that a song like this was made in 2000. It sounds like nothing on it’s parent album, nor does it sound like much else that was out at the time. Yet, it sounds so much like a lot of the music that was to come later – to that point that a song inspired by it some 9-10 years later can be fresh and highly acclaimed.

The rest of Stankonia doesn’t quite maintain this level, but then again it contains 24 tracks including skits. Don’t know why rap albums insist on the skits, but these are some of the better ones that I’ve heard. Although, they don’t quite have the funny moments when compared to those on The Love Below. Another highlight is, obviously, ‘Ms Jackson’ – a song that will now always be to me about eels and how he is several fish and not a guy.