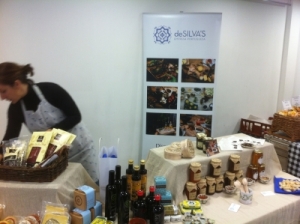 I think I have mentioned Startisans before. It’s a fantastic food place near the office with a rotating roster of vendors. Well, for the first time there was deSilva’s, a stall specialising in Portuguese imports. I’ve been toying with buying some things from their website for a while so this felt like serendipity.

I was excited. There were two things on offer that I have been actively looking for. I was so excited at the prospect that I fear I came off a little bit creepy. I can not say for sure, but I was proper gushing at how happy I was to be able to find food from the 1001 Foods book. £30 later and I walked away with three things for the food list. I figured, I may never see this stall again so why not. This is why I claim money for my Saturday overtime after all… to pay for my decadent lifestyle of cheese and plums. 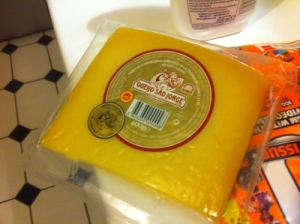 I am glad that I picked the 4 month old to take home, however, because of the milder flavour and springier texture. There is a sourness to this taste (looking up the term on Google I guess that would be described as lactic) that reminds me a bit of the provolone piccante that I tried a few months back in both taste and texture.

I bought some green olive bread to pair with the Portuguese food and it was a match made in heaven with the cheese. 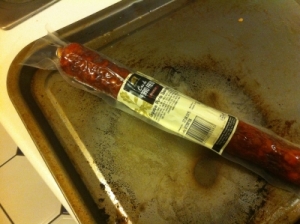 If I were to describe this simply it would be ‘Portuguese chorizo‘, but that’s not the whole picture. The smokiness is not as strong as chorizo and the bite is more similar to kabanos. Actually, I think that’s it. Linguiça is what you would get if you had chorizo mixed with kabanos.

I can only imagine just how gorgeous this would be fried and served hot. Instead, I ate it sliced with the São Jorge cheese and the green olive bread. Like with most sausages of this type it is rather oily and it rich in red fat. Profoundly meaty too. 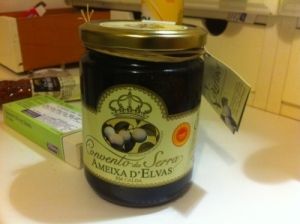 And now, the star of the show. I have been waiting two years to find some of these preserved Portuguese plums, and then they turn up right on my doorstep. The plums were available either jarred or in a box. I opted for the jarred version for the sake of the syrup. This jar cost about £15, which makes it one of the most expensive items for this list so far.

There is an audible puckering as you fish the plums out of the rich, thick syrup. On its own the syrup has a mellow sweetness with the strong taste of plum. The plums themselves… feel like pure decadence. 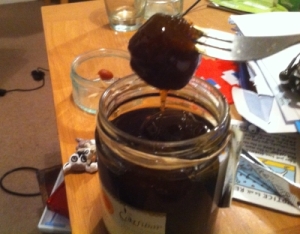 I had to put the jar away after the third plum. At about £1 a plum I was very aware that these are things to be sampled and enjoyed instead of being stuffed in my gob. Also, the whole thing is just so rich that I could tell that if I went beyond five of these I would either start to feel sick… or have a horrendous sugar rush followed by a crash.

At some point I need to find some cake to have the rest of these plums with. Or maybe just bake a cake. Like angel food cake. I bet that would work REALLY well.