List Item: Listen to half of the 1001 Classical Works You Must Hear Before You Die
Progress: 93/501 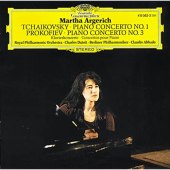 The beginning of this piano concerto is so famous. I remember when my nan used to watch quiz shows on Challenge TV, there was recurring advert for a classical music collection and this beginning would always play when Tchaikovsky appeared on screen. I think it would always be followed by ‘Morning Mood’ by Grieg (I’ll get to that eventually when I listen to Peer Gynt).

Given how the beginning is all brass and string, it’s difficult to immediately see how it would become a piano concerto. Then suddenly in comes the piano and my word doesn’t pianist Martha Argerich do amazing work with this. It’s one of those concertos that I think most people would know, although it is more than the pomposity of the beginning – a beginning that makes up the most of the piece. It’s a good one, but I do miss the whimsy that I hear in his ballets.

List Item: Listen to half of the 1001 Classical Works You Must Hear Before You Die
Progress: 37/501 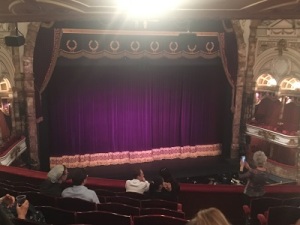 It has been two years since I saw Swan Lake live at the Royal Albert Hall… so it really is about time for me to see another ballet (it’s also high time that I saw another opera, but these things cost money). These tickets were a present for the hub as, apart from a brief version of The Tin Soldier in Tivoli Gardens, Copenhagen, he had never seen a ballet before. Thankfully he really enjoyed it and I think we’ll be seeing some more of these when good (cheaper) tickets are available.

With this that’s the third of the three Tchaikovsky ballets done. I’ll probably end up seeing The Nutcracker at some point in the future – even if it is just to complete the trilogy. Of the three ballets, this one was probably the weirdest of the three to listen to (and watch) properly. Why? Well, as with a lot of the classical pieces so far, I know most of this music via Disney.

Having grown up with Disney’s Sleeping Beauty on VHS, I am really well acquainted with a lot of Tchaikovsky’s score. The weirdness came not from the difference in the narrative (although that was a bit discombobulating), but the context for the music. For example, in the film there is music that is linked to the princess being hypnotised and, eventually, pricking her finger on the spindle. In the ballet, however, this is a dance done in the final act by two dancers dressed as white cats… who happen to be guests at the wedding.

With the two stories being fundamentally different it makes sense that music was being used for different plot beats – although some, like the entrance of the evil faerie, can still be found in remarkably similar contexts.

Anyway, the music for The Sleeping Beauty is excellent and, as you would expect for a ballet, so much is gained by having the dancing as a narrative context for the music. I know that with ‘The Dance of the Garlands’ I would have still thought of the iconic ‘Once Upon A Dream’ sequence – which would have still be fun, but also a pity as I would have missed out on the proper storyline.

I would honestly like to write more, but it’s getting to 2 am after a long week at work. So I’ll end by saying that I am so glad that I was able to see this live and get the most out of the music. I also loved the idea that the ballet wrote in a dance between Red Riding Hood and the Wolf – such a weird idea to shoehorn this into this ballet, but I’m glad they did.

List Item: Listen to half of the 1001 Classical Works You Must Hear Before You Die
Progress: 32/501 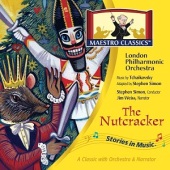 There are times where the only thing that helps me concentrate at work is some classical music (or ambient music like Digital Rain by Johnny Jewel). I have pretty much done Chopin’s Etudes and Beethoven’s Kreutzer to death by this point so, for whatever reason, I decided to pop on The Nutcracker.

Despite only writing three ballets, it is hard to deny that Tchaikovsky didn’t write three classics. With The Nutcracker, Swan Lake and Sleeping Beauty (which I’m actually seeing in a few months) to his name, it makes me wonder why he didn’t write more of them. He obviously has an incredible talent for them and having listened to The Nutcracker on Spotify… well I just want to see it live now.

Having read up on the story that the music is written for, I do wonder whether knowing this even matters. In the end, for a ballet like The Nutcracker, it really is a bunch of beautifully composed and choreographed set pieces loosely stuck together with a narrative thread.

I mean, it is easy enough to deduce from the music alone that the second act of the ballet is the more fanciful and far more interesting than the first one. I’m likely not alone in saying that my favourite section of music in this ballet is the Divertissement in the second act – where the different residents of the Kingdom of Sweets dance for the heroine (the Chinese and the Russian dances being my favourites).

Now, I swear that I’ll be done with the Fantasia music soon. It might make sense for me to prioritise it over the rest of the list; just so that I am able to listen to more music with fresh ears and fresh images in my brain. Don’t get me wrong, it was great to have the dancing thistles in my head for the ‘Russian Dance’, but I like to be able to think of my own interpretations rather than remember someone else’s.

At least when I see Sleeping Beauty live I will be able to associate that music with the live ballet more than the animated film. Well, live in hope.

Thanks to the manga Nodame Cantabile I decided that I wanted to add a classical music list to this blog and that would be that. Unless I end up completing one and add a replacement… but that didn’t happen for the Oscars list so we’ll just see how that goes.

Rather than just add it and leave it to rot (like how I have not read any Shakespeare for over a year) I have waiting until I had something cool to write about. I am starting this list near the beginning as the only classical works I can definitively check off are Verdi’s La traviata and The Planets by Gustav Holst.

Now, I already checked off watch a ballet with my Copenhagen post. This time I think I can properly check it off with a three hour performance of Swan Lake in the Round at the Royal Albert Hall.

List Item: Listen to half of the 1001 Classical Works You Must Hear Before You Die
Progress: 3/501 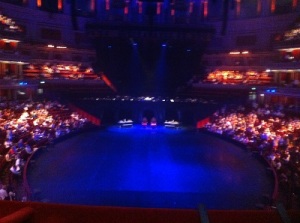 Before I go too far into this – just how amazing were our seats! Granted this is the Royal Albert Hall with ballet being done in the round so unless you are right up in the nosebleeds there are no bad seats. Still, these central seats were absolutely amazing!

Even though I have seen 45-60 minutes of open air ballet before this was my first proper taste. 3 hours and two intervals. To be completely honest such a runtime was actually quite daunting. I should not have been worried though as the time just flew by, especially in Acts 2 and 3. Act 1 probably could have been edited down for me as I was nowhere near emotionally invested enough in the story (which hadn’t really started) to give too much of a crap about flouncy prince’s birthday party.

Yes, I called him flouncy prince. I only found out his name after the ballet and, when you look at him, flouncy is the only word that comes to mind when describing him. Actually, if you do not know the story too well you would be excused to think that the reason he was not yet married at 21 was (apart from the obvious modern day thoughts of that being way too young) that he had an animal fetish. He does fall in love with a swan afterall.

Thanks to general reading around and the movie Black Swan I know this is not about a zoophilic prince. I just enjoy winding my mum up.

The music in this ballet is spectacular and so incredibly famous. Pretty much anyone knows the ‘Swan Theme’, it’s heavy use in TV and movies (such as the older Dracula film) has ensured that this is arguably the most well known ballet of all time.

As gorgeous at the ‘Swan Theme’ is (and when it gets properly going at the end with the bras section you are hard-pressed to stop the hairs on your arms from leaping from their follicles) the bit that I enjoyed watching the most was the famous ‘Dance des petites cygnes’. I don’t know where I know it from, but I knew the whole routine as I was watching it, and it was just beautiful.

I think that this might have actually kindled in me a yearning to see more classical music performed live. I mean I’ve already got opera tickets booked for next week!