Despite boasting the smallest number of countries, the continent that I think will give me the most trouble is Oceania. Where Africa has the most countries with a lot of unique ingredients, the continent’s diaspora means that I am able to make a number of their dishes by using specialist shops and websites. For the island nations of Oceania… this isn’t always the case.

As I wanted to cross off one Oceanian nation within the first five, I thought I would go for one of the larger nations – which is how I ended up opting for New Zealand. It’s interesting to see how a nation’s menu changes over the centuries. I mean, for New Zealand they have got a traditional Polynesian cuisine that has been fused and/or usurped with the food brought by Europeans. In the years since it has come difficult to differentiate what makes for New Zealand or Australian cuisine, which is a long way of saying that I hedged my bets this week and made three things. 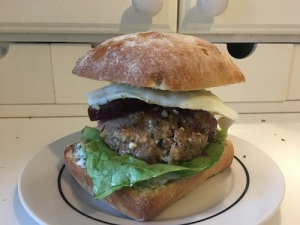 Ah yes the Kiwiburger. When I first came across one of these it was as a menu item in Gourmet Burger Kitchen where some of the profits of selling the burger went towards kiwi bird conservation efforts. Little did I know that this was the invention of a McDonalds franchise owner from who wanted to create a proper New Zealand burger that would both sell and be representative of what was being eaten before fast food chains really took hold.

Since then this burger, topped with beetroot and a fried egg, seems to have been properly embraced with many different recipes and variations now being available online. Of all the versions out there, I went for Chelsea Winter’s Ultimate Kiwiburger as the one I chose to make.

As you can see from the picture, this kiwiburger is absolutely massive. The patty itself was a delicious mix of flavours and was one of the moistest burgers I have ever made. I wasn’t  a big fan of having beetroot on the burger (since I don’t particularly like pickled beetroot), but it was worth using it for the sake of accuracy. Eating this burger filled me to the point that I had to defer dessert until the next meal, which is a pity as this is the best dessert so far. 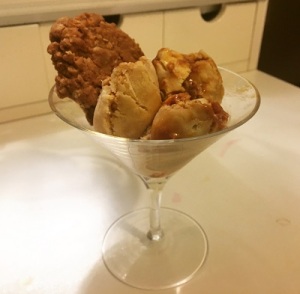 Anzac biscuits are, rightfully, claimed by both Australia and New Zealand as they are mainly associated with the Australian and New Zealand Army Corps during World War One. The biscuit, whose recipe contains minimal perishable items, are mainly flavoured by oats, coconut and golden syrup. It’s a particularly dry mix (which always catches me out) but these are one of those biscuits that have always come out well for me. I really could not resist the urge to revisit this recipe, especially as (when I get around to Australia) I am thinking of making something similarly shared between the two countries.

For the second dessert I made something that appears to be quintessentially New Zealand: hokey pokey ice cream. As a concept this is very simple, a vanilla ice cream that contains folded in pieces of honeycomb. However, I am not one to do things by half… also I am not entirely sure where I would be able to buy a slab of honeycomb,

No. In making hokey pokey ice cream I actually learned how to make my own honeycomb – which was so quick and easy that it honestly felt like I was doing a magic trick in the kitchen. For the vanilla ice cream I got out my ice cream machine (which I hadn’t used for well over a year and so had forgotten about the need to freeze the bowl in advance) and followed this recipe from The Kiwi Cook.

Honestly, this tasted better than a lot of ice creams I have bought from the supermarket – and it was really fun to make to (and cheaper!). It’s a shame that for my next country, which is going to be either The Gambia or São Tomé and Príncipe, there will just be a main. Still, it is high time that I did an African country and I look forward to seeing which of these ends up being crossed off first.

Time for me to open up the second of my three film bucket list items with a rather arbitrary goal of seeing films from 100 different nations. Unlike the Oscar list item this is something that can be permanently crossed off unless I suddenly get the urge to add another batch of countries to keep this going.

Now, I have decided to count countries as long as I watched the film after I put this onto my bucket list which was (yes I made a note) on August 5th 2013. This means that some countries (e.g. Finland, South Africa, China and Israel) are not on the list yet despite me having seen them in the past. I figured using this cut off point would serve as a way to make this more challenging whilst also keeping Burkina Faso (still stoked about that one).

Whilst I was preparing this list I saw there were 21 countries on the list and instantly envisioned doing a really cool triangle number diagram as you can see below:

Notice the problem? Well in making that list I had forgotten that I saw a Polish film at the end of January which means poor Hungary (my most recent nation) has to lay on the outskirts since I decided to do this in order of seeing them. My inner math-geek is not impressed with this. It was later pointed out to me that a film I thought was Australian was from New Zealand, now my inner flag-geek is unhappy too.

Still 22 countries down, 78 to go. Not a bad place to start with, although there are not many of the big film nations left which will make this interesting.

Any film suggestions for yet unwatched countries will be VERY much appreciated. Bear in mind re-watches are not allowed here so films like Tsotsi, Drifting Clouds and Waltz With Bashir will not count.