So here it is, the last full day in South Korea. As my husband packs in the background I’m hoping that he’s going to suddenly surprise me with a train ticket to Daegu or Gangneung and say that I’ve been mistaken and we have a few more days, but the hopes of that are fading fast.

As with a lot of our holidays, this final day in Seoul is a bit of a grab bag of things that we wanted to do but could not fit in on other days. It’s meant a mixture of a lot of walking and some sudden long trips on the metro, but it’s good to say that we’ve pretty much seen everything that we thought we would try to fit into our four full days. There’s more than enough left on the planning room floor if there is to be a future visit to Seoul, but for now I’m happy how we got through things.

To start the day, we went to the final place on our Korean palace ticket that we did not have time to do cross off yesterday – the Jongmyo Shrine. This is the only place on the ticket where a tour is mandatory and, for English speakers, there is one of these every two hours. The reason behind this is that Jongmyo Shrine is essentially the nation’s spiritual shrine. It’s the place where the spirits of the Joseon kings and queens are venerated and where the ancestral rituals take place, so you can’t just have hundreds of unchecked people running around.

As with the other tours we’ve had, the tour guide was excellent and was really able to get across the spiritual importance of the place with a smile. The tour itself can’t show you the insides of the two main buildings, because that’s where the spirit tablets of the monarchs are held, but a room is set up so you can get an idea.

The main building, known as the Jeongjeon, is where the spirit tablets of 19 kings and their key wives are held inside. It’s also one of those buildings that you just cannot photograph well because it is just so very long and impressive. The look is quite simple, as it is meant to be a solemn place, but there is no denying the impact.

You also have the Yeongyeongjeon, which is similar to Jeongjeon but narrower and the spirit tablets held inside are of short-reigning kings and some royal ancestors. It is still a very long, impressive and hard to photograph building. It also feels a bit savage that kings who had a short reign, possibly due to illness, are relegated to here because they don’t have recognised achievements.

Continuing the theme of calm in a major city, we wandered south from the shrine and through some streets where the only thing they sold were light fixtures and accessories (because sure) and down the stairs so we could walk along the Cheongyecheon stream. Opened in 2005, this stream cuts through downtown Seoul and is this amazing refuge of nature that adds so much green and provides a stress and traffic-free way to walk nearly 11km across town.

This stretch doesn’t just contain a stream and some trees, but there are waterfalls and art pieces as well. I really wish that there was something like this in London in the non-rich areas that also had water so clean that carp can swim in it. Still though, it was lovely to go there now and use it as a path between different areas.

So that brings me neatly onto Insadong. So many places online talked about this being the perfect place to go in order to purchase souvenirs, and that would definitely be accurate. Problem is, I’ve pretty much bought all the souvenirs that I can conceivably fit into a suitcase. Didn’t stop us from buying a couple of t-shirts and me recoiling in terror in what my size would be here in Korea. What can I say, UK sizes are far more forgiving and I am six inches taller than the average South Korean.

From here, we walked a fair bit so that we could wander through the Bukchon hanok village. This is the third hanok village (an area containing traditional hanok housing), the others being in Jeonju and Gyeonju. Being that this is just outside of downtown Seoul, the entrance to the area still feels very city like and very few buildings are actually in the hanok style (although thankfully one of them sold hotteoks, so I was able to have a snack). 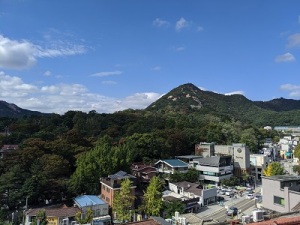 Further into the walk, however, the sound begins to melt away and the percentage of houses in the hanok style begins to increase. It never quite reaches the level as Jeonju, but that’s because people still live here and the walk is taking you through a residential area. A beautiful residential area, but a residential area nonetheless. Makes for some wonderful photos though, especially when you get to the higher ground and get a good look around you.

It was back to base for some snacks and to drop off my new t-shirt before making the walk to the Namsan cable car and heading up the mountain that so dominated the Seoul skyline. Why? Well, the final Lonely Planet entry is here. 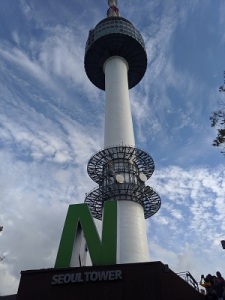 I have yet to find a place in main Seoul where you can’t catch a glimpse of N Seoul Tower. The tower itself isn’t too tall, but it sure has one hell of a natural vantage point. The area around the base of the tower already has a great number of views and, for some reason, the most love-locks that I have ever seen. I mean, they encourage it by selling them at £10 a pop from a lovelock vending machine, but they have whole shrub-like structures of them. Still though, managed to find a gay one – hope they’re still together. 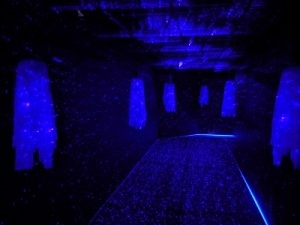 The journey up the tower takes 7 seconds and, since it was Halloween, the music at the top appeared to be ‘Thriller’ and the Ghostbusters theme on a loop. Also, continuing the Halloween theme, the pre-elevator had this long tunnel with star-like lights and tissue paper ghosts hanging from the ceiling. It might have taken all my need to suppress the giggles I wanted to unleash.

As you would expect, the view that you get from the observation deck is stunning. Like our time at the top of the Montparnasse Tower in Paris, we were constantly roaming around the observation deck to see how many places we could see that we actually visited. We could even see our hotel building from up there, which was a first. Being up here really shows just how beautiful a city Seoul is and how stunning the rivers and mountains that the city nestles in are. Since we got here earlier than expected, we’d have had to wait over an hour before the sun started to set, so we said our goodbyes to the scenery, made our way down via the cable car and headed to Yeouido. 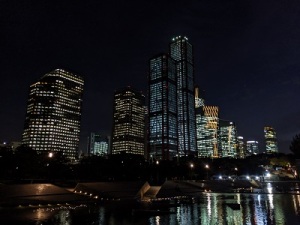 The reason that we came to Yeouido was for the World Night Market, which is one of the Bamdokkaebi (meaning “night goblin”) night markets that are run in various parts of the city on weekend nights. Before getting there, however, I found myself bewitched by being on the riverbank in Seoul for the first time after dark and seeing the buildings all lit up. Not the first time I just drifted off from my husband without saying a word, surely won’t be the last either.

We eventually made it to the World Night Market, and they weren’t kidding about the title. There were so many great looking stalls here that it made it hard to make a decision, but I knew I wanted to leave room in case I came across a final Korean fried chicken stand later on.

So, shared between us, we ended up with some sweet and sour pork, takoyaki – cheese flavour and a pork banh mi. All delicious and, as I write this, I just realised that they were all Asian which was actually unintended. This market also had some delicious looking pizza on offer and massive seasoned turkey legs, but I choose my choice and would do so again.

Time to make our way to our final destination of the evening: Banpo bridge. This bridge, which is near some beautifully lit-up buildings on manmade islands, does
a three-times nightly show which is a simple and soothing take on dancing fountains. There’s nothing too flashy here other than the world longest bridge fountain with hundreds of water jets and LEDs that change colour. The movements are gentle and hypnotic, which really did make for a lovely ending to the day.

Oh, but what’s that across the road from the viewing area of the bridge? Why it’s another of the Bamdokkaebi night market that we came across completely by accident? I found out later that this particular one is called the Banpo Romantic Moonlight Market and, given the setting with all the riverside seating, that’s really the perfect name. It also means that I got my final pot of Korean fried chicken and ate it looking on the Han River and the lit up buildings.

And that’s that for my time in South Korea. It’s been two truly incredible weeks and I have no doubt that I am going to be making it back here, hopefully for the 2030 World Expo in Busan where so much will have changed that it’ll like being there for the first time. I also expect the number of western tourists is going to be a lot higher in a decade’s time, which will be an adjustment.

Just going to finish off with a big thanks to all the Korean people. Sure I’ve seen kids throw gravel at each other in a subway and there was that one guy who openly moved to another section of the airport seating in Jeju as U.S. foreigners sat next to him, but nearly all of my interactions have been incredibly positive. So thank you for having us and for making us feel like welcome guests in your wonderful country. It’s going to be so hard to leave tomorrow.