I tell you, this awards season is getting harder and harder to pick a favourite. Seriously, last year it was difficult because of La La Land, Moonlight and Arrival all being incredible movies… but I am having real trouble here. Three Billboards Outside Ebbing, Missouri just feels like a masterclass in acting.

If you had told me that this film was a Coen Brothers production I would have probably been taken in. I mean, this is a very black comedy starring Frances McDormand that is laugh out loud funny and yet has some extremely touching moments. Sounds like a Coen Brothers film to me.

Seriously though, for a film about a grieving mother who is relentless in her mission to bring the murderer of her daughter to justice, I haven’t laughed out loud so much in months. The script is a work of genius and I really hope that it wins the Best Original Screenplay nod as, of all the nominated films I’ve seen, it really deserves it.

Then again, the script flies because of the performances by the three leads – with Frances McDormand and Sam Rockwell being the obvious standouts. Back when I watched The Shape of Water I thought I wouldn’t see a better leading female performance this year… only to be proven wrong. I also have to admit defeat that, once again, it won’t be Michael Stuhlbarg’s year as Sam Rockwell somehow makes you cheer for his utterly ridiculous and racist cop.

Going into this film I expected this to be all about the investigation, but instead this boils down to a character study about stress, grief and the sense for justice. There is a fantastic scene that really epitomises this for me, and it’s where Frances McDormand’s character gives a speech about culpability. There’s a wider message here for society as a whole (although she directs it at the church), but that’s something for another time. 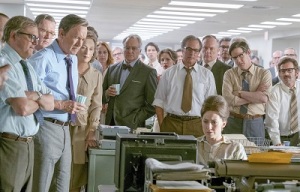 On the surface of it, I should have the same complaint with The Post as I did with Darkest Hour. This is a movie about a newspaper investigation (something the Academy likes), directed by Steven Spielberg (whose films usually garner nominations) and starring multi-Oscar winning actors Meryl Streep and Tom Hanks. Hell, it even includes Michael Stuhlbarg in a supporting role… which appears to be a sign of Oscar quality nowadays.

The thing is, where this contains the recipe for Oscar glory this feels like a film that has been made more because of the current political climate than in the quest for awards. Because of this, and it’s something that becomes clear very quickly, it feels like The Post will be a film that’s remembered for a lot longer.

Also, whilst they stretch the truth of the involvement of the Washington Post’s involvement in the Pentagon Papers, they don’t just invent scenes that are out of character just for the sake of an Oscar nomination reel. Also also… at least The Post is interesting and paints these characters as real people that you can root for.

Now.. as much as I love Meryl Streep, I don’t think this is an award worthy performance. There’s not a whole lot for her to work with here (unlike Frances McDormand and Sally Hawkins) but, to be fair, that’s the role and she pitches it exactly correctly. Same goes for Tom Hanks… who seems to have been forgotten by the Academy of late.

For me, the best thing about this film was just watching Meryl Streep and Tom Hanks acting together. Considering all the scandals going on in Hollywood there is something mildly therapeutic about watching these two masters onscreen together. The Post is worth a watch just for that to be honest.