Over 20,000 steps walking today! So my feet are throbbing as I type this out. I am also munching some local grapes, but more on those in a bit.

Big thing is, we appear to have completely beaten jet lag! We ended up sleeping about 11 hours, but that was clearly what we needed. So we left the hotel at around 10 headed for Hiroshima Peace Park and adventures beyond…

…well that was the idea. We got to one of the many bridges of Hiroshima (since it is built on a delta) and brought out our map in order to confirm that we were taking the right route. Then this old Japanese man comes over, obviously thinking we are lost, and offers to give us directions. Now, hubby got the wrong end of the stick and pointed to Hiroshima Castle.

In Britain if someone comes up to you and offered to give you directions… which is never, but if they did it could be a quick point in the general direction and then an exchange get of thanks. We are, however, in Japan. He lead us across the bridge (he couldn’t walk too fast bless him) and then pointed us in the right direction. I know he was heading in that direction anyway, but talk about being ultra helpful! 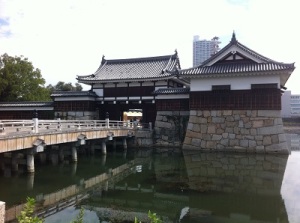 So, Hiroshima Castle it was. Well, the reconstruction of the castle anyway since it was flattened with the dropping of the atomic bomb like pretty much everything else in Hiroshima. 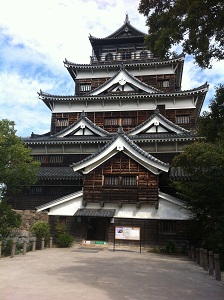 What we saw was built about 50 years ago and is exactly how it used to be, which is impressive. The complex itself was really large. At one stage the complex was one of the largest in Japan, which really must have been a sight to see. 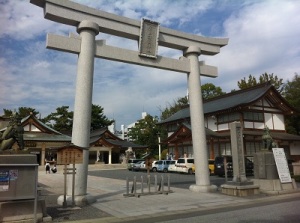 It also has a Shinto temple within the complex, so we paid to have a fortune from the box. They know their tourists, so we grabbed an English one each, and then some drinks from some of the numerous vending machines in Hiroshima. 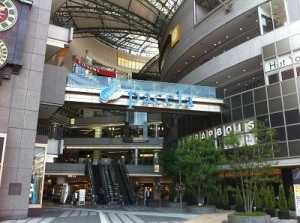 Time for a big lunch and we visited one of the MANY shopping buildings in the city. After admiring a lot of fake food we settled for a place on the 8 floor called Chibo. and I have to say that the food was gorgeous and we managed to get a really filling 5 dish sharing meal for us.

The highlights of this meal (although the pork potstickers were gorgeous) was the mixed yakisoba and the Hiroshima-style Okonomiyaki. With the first one, I have had yakisoba at home before, but I don’t know if it’s the fact that it was cooked fresh (almost in front of us) or if it was the local ingredients, but this was the best one that I have ever had. The sauce probably helping out there.

The okonomiyaki was just impressive to look at. I am not sure what makes this is particularly Hiroshima one, maybe it’s the types of filling, but I think that any other ones that we eat may have a tough act to follow. The sweet soy sauce and mayonnaise topping alone was lipsmackingly gorgeous, but with a wealth of noodles, spring onions, cabbage, seafood and pork inside it was never going to be bad.

Both dishes also gave me the chance to try bonito flakes/grated katsuobushi, which flailed about on the heat of the teppenyaki like they were still alive somehow. They gave the dishes a very strong umami flavour that I appreciated more and more as I ate. 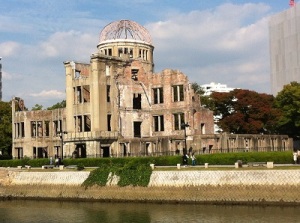 It was Peace Park time after lunch. Just staring at the A-Dome brought a lump to my throat. I mean it is one thing seeing documentaries about the dropping of the atomic bomb, but it is another thing to be presented with the destruction it wrought. Not on,y is it standing in memory of those that died, but geographically it marks a point between the newer high rise buildings and a large expanse of green.

The park itself was incredibly peace focused with a peace flame, a peace pond and many different monuments to the dead. Peaceful… aside from the numerous groups of school children there on visits. They were perfectly behaved, but all of them seemed to have the task of the day to practice their English on tourists. Being the 6’3″ redhead that I am we got a lot of them. 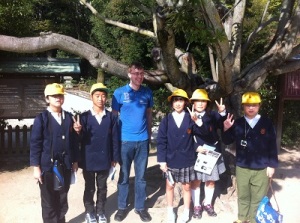 (hubby with his new fan club)

I think we ended up being asked questions by 7 different groups of students of varying ages, and had our photos taken with half of them (managed to get a shot of hubby with a group of them). It was incredibly sweet and we were more than happy to help them practice their English. By the end we did start to notice when they had spotted us and got ready to make a good impression of the English and Dutch people for these young Japanese people. 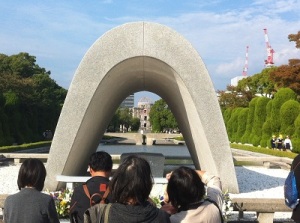 So friendly were we that we ended up in a conversation about peace with two middle-aged Japanese women… only for them to turn out to be Jehovah’s Witnesses. We only found this towards the end when they asked me to read a verse from the bible using the JW.org app on their tablet. They seemed so happy that we both knew the Bible and that we had chosen to visit Hiroshima first on our tour of Japan that it seemed cruel to mention that we were married gay atheists. So I read the bible verse and let the conversation reach it’s natural conclusion.

After the Peace Park it was a long walk across town to reach another park, Shukkeien Park. Now this was beautiful in a number of different ways. Not just because it contains a ginko nut tree that actually survived the nuclear blast (wow!), but just in how everything was organised. If we had gotten their earlier we could have watched a traditional tea ceremony. 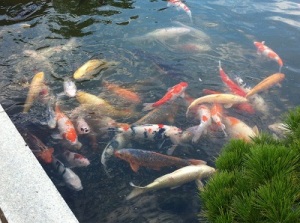 Still, there were enough to koi carp, bridges and general plant gorgeousness to keep us walking around until it closed at 5.

We continued to walk around Hiroshima for three more hours before settling in for some dinner. We took in a round of the new Pokémon fighting game (which is excellent), browsed a number of stores and made some two blog food related purchases before dinner in the food court of one of the many large stores. 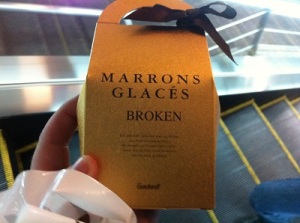 Now, after many unsuccessful runs the previous Christmas, I found cheap Marron glacé. The only caveat being that they were broken. Still, how can these be cheaper here! Having had them, I am now glad that I didn’t fork out a lot of money on the. I mean they are nice enough and they rather sweet, but if you have had chestnuts before there is no real surprise. They have the same nutty taste and chalky texture, it’s just that they are a whole lot sweeter. 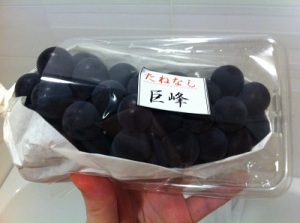 Something very Japan specific here. Coming out here I made a list of food to look out for, and this is one of the big three that I am trying to hunt down. These do not taste like the grapes I have had back in the UK. In fact, they taste more like the grapes that I imagine grape flavoured sweets are based on. Just without that  artificially sweet taste. The best thing about them is how they slip right out of their skin when you eat them.

On the first taste I wasn’t too sure about them since they taste so different to what I am used to. Now? We easily finished the bunch between us.