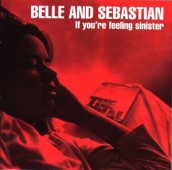 This album listen is a bit of a calculated risk since, as of writing this, I am aware that the site that puts up the list I am using is doing a recalculation of the list. I may end up being set back a few weeks seeing how the update goes… since both of the Frank Sinatra albums are poised on the edge. Anyway, this week I am gambling that If You’re Feeling Sinister retains its place.

I am very much like my mum whereby I assign seasons to a number of albums and movies. Vespertine by Bjork and Illinois by Sufjan Stevens are rarely played outside of the cooler months whereas the entire back-catalogue of She & Him and Belle & Sebastian are very much summer albums.

The first time that the name Belle & Sebastian entered my awareness was at the BRIT Awards where I was angry that they beat out Steps to the award for Best British Newcomer. Please remember I was nine here and, through the magical art of retrospect, I can agree that they were the preferred interest over the likes of 5ive, Cleopatra and Steps (I still love you Steps).

Outside of The Smiths there are very few acts that are able to successfully bring together a sense of humour (sometimes biting in the case of the S&M-loving churchgoer mentioned in one of their songs) and music that is part-folk, part-indie and part-pop. Stuart Murdoch’s voice is not strong but it doesn’t really need to be. It’s wry and he is able to sing his whimsical and bitter-sweet songs with complete sincerity.

Since a lot of the tracks work well where they are placed on the album it is hard to place which ones would be stand-out in my eyes. For me they would probably end up being ‘Mayflower’, the opener ‘The Stars of Track and Field’ and then (the best of them for me) ‘Seeing Other People’.

If You’re Feeling Sinister is truly an album that could have been released any time since the sixties. It is timeless in so many ways. I mean, it could have so easily come out this year or in the middle of the eighties. I don’t think there are many albums I have listened to that have this quality.