We have a rather large Sainsbury’s not too far away and I am not sure why I had not paid a visit to it for the sake of bloggery until now. We managed to find a number of things for a ‘deli lunch’, one of them which has meant the final Iberico de Bellota meat has now been found. 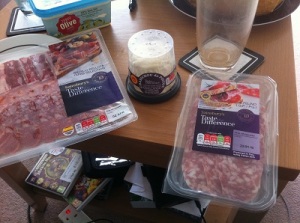 Since I knew that chabichou has a delicate flavour that was where I made my start. It was firm, creamy and had more than a hint of goat to it. In fact, this cheese actually reminded me a lot of the Selles-sur-cher cheese I had eaten before Christmas, right down to the slight ashy taste from the rind.

This then lead to the Felino salami. It was a very tender salami with a succulent and sweet edge to it, making a nice accompaniment to the goat cheese. There was a taste of peppercorn and a slight hint of fennel seed to it as well. 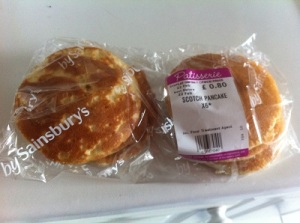 Breakfast the next morning, some rather nice Scotch pancakes fresh from the toaster. There isn’t much to this aside from good comfort food that is improved with a light spreading of butter slowly melting into the fluffiness of the pancakes.