This is our cocktail cabinet. It was my main Christmas present to my partner last year since he has talked on and off about wanting to have the fixings for a decent liqueur cabinet. I know next to nothing about alcohol so had to get some help in putting this together. Still, this has meant that my inner 50s housewife sometimes emerges as I make him cocktails in an evening.

Since getting my partner his cabinet filled with alcoholic goodies I have made a wide variety of different cocktails. Now, whilst I have not taken pictures of all of them (as that would be a lot of pictures of liquid). So instead I have included pictures of three different ones that went down rather well.

Well, you can not make a decent Bloody Mary (or in the case of my drink, a Bloody Shame) without Worcestershire sauce or Tabasco now can you? The pepper spice mix and the smoky heat just makes the tomato juice work more for you. For some reason a Bloody Shame with some dry crackers cures my stomach if it gets too acidic… no clue why.

I didn’t have any celery to hand here so instead I used some physalis (aka cape gooseberry) as an edible garnish; obviously I removed the leafy outsides first. The sweet and sour citrusy burst worked well after it had been steeped in tomato juice, maybe someting to remember if I ever open a cocktail bar…

It’s a common thing to happen after university ends. You and your friends no longer life within walking distance, you all get jobs and suddenly you don’t see each other all the time. It sucks. This is why me and some of my university friends have decided we would go down the Come Dine With Me route and do a cycle of cooking for each other. Of course, I was the first to host which meant I had to try and set the standard. 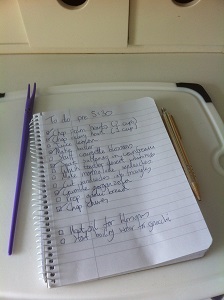 To make it more interesting all, bar one, of these recipes were things I had never actually cooked before. They also formed a nice link to me quest to get halfway on the 1001 food list (this obsession will die down soon… I expect). So in the next two posts I’ll share the food that made this evening great.

Okay so I may have forgotten to take pictures for this course… which doesn’t matter for one since I already took pictures when I made it a little while ago. The home-made garlic bread is a little unfortunate since it was delicious, easy and covers two additional food items:

Ingredients (serves 4-5 as a starter):

I’m not even going to make this scientific. Spread aioli on the halved ciabatta, sprinkle generously with the dried basil and oregano. Cut the ciabatta into smaller pieces, put on a baking tray and bake in an oven pre-heated to 200°C for about 10 minutes so it’s nice and crispy.

Okay, so I made up a cocktail in honour of one of my friends who was there… but it got awkward when people wanted a non-alcoholic version and called it the Virgin [Friend’s Name] and it got a little bit awkward. So I let her rename it… and we have the drink henceforth known as The Girth.

Apparently it was nice, I don’t drink alcohol. But you don’t need to shake this drink, just give it a quick stir with the straw and serve.