Say it with flowers. Say it with chocolates. Say it by dragging your engagement partner on a 5 mile walk to the next town so you can try and find ham in a nearby Polish food store. Sadly, this was not to be and I walked home without any wedzonka krotoszynska, but with a Subway in my belly and some other list items I managed to find along the way.

Yes, this is how we spent the morning of Valentine’s Day. We don’t take it too seriously because our anniversary is close and we value that more. Still, it meant we were able to get some list foods for the future (and we had a curry for dinner using a Hungry House code so all is well). 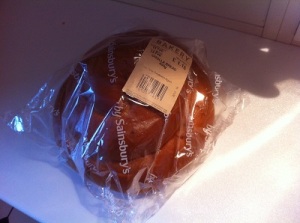 Valentine’s Day is nowhere near Rosh Hashanah so I am not sure why they were selling challah bread as this more circular shape instead of the more traditional braid. Still, one should never look a gift horse in the mouth (or the house as I originally typo’d) so we bought a loaf.

As breads go it is very similar to brioche in the sweetness but the crumb feels a lot denser, like a bread that would very quickly go stale if left out for too long. Later, we found this to be true with uneaten slices ranging from completely fine to as stiff as chipboard.

Turns out that the type of sour cherry jam you get varies a lot on the country of origin. By the look of the label and the way it is described in the book I think this is more on the Turkish side.

As jams so this is not as thick as I have come to expect. Instead of being more jelly-like, as with other jams, this felt more like sour cherries being preserved in their own syrup. This went very well with the challah as well as with some mature Dutch cheese.

I am fortunate to live in an area with a lot of Indian restaurants that deliver, with one of them offering this salted and dried fish as a starter. Now, thanks to the book I actually knew what this was… unlike a lot of other people apparently.  3-5 minutes later we received a phone call from the restaurant with them seeking to double check that we actually knew what Bombay Duck was or if we thought it was something akin to chicken tikka. Bless, I can only imagine the number of complaints.

When fresh the Bombay Duck is a rather fearsome looking type of lizardfish, but here is had already been processed so it looked rather brown and shrivelled, also it was so warm from being recently fried. This is not a starter in the traditional sense, or maybe it is the fact that I can’t imagine people just sinking their teeth into this.

This is up there as one of the saltiest things that I have ever tasted, and this is coming from someone who liked anchovies almost immediately. On it’s own it is something I could eat, but I started pairing it with other things we got in the takeaway and found it worked better as a sundry than as a starter. If I ever get this again, a possibility, I need to remember to crumble it into my curry or to snap it into pieces so I can dip it in the pickles/chutneys.