It’s that time of year again (well it was) where Europe gets together and gets to enjoy each others entries in the Eurovision Song Contest. Obviously it is long over when this post goes up (and I will have probably played Austria’s entry to death by then, despite voting for Croatia), but it’s always nice to revisit one of your favourite days of the year. 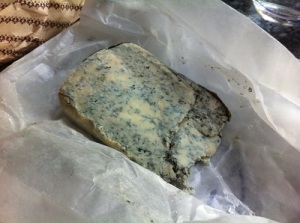 In order to prepare for Eurovision we made an obligatory trip to Borough Market and wouldn’t you know there are still many more things yet to cross off from there. This Spanish blue cheese is a case in point.

Now look at this slice of Cabrales. It has got to be the bluest blue cheese that I have ever laid eyes on. The texture was crumbly, something that I have never seen in a blue cheese before (my guess is that the concentration of mould is so great in this cheese that it kinda interferes with the structural integrity at some level). Tastewise it was still fairly creamy, but was just so intense at times that I would liken it to a drier Cashel Blue that was on crack. This was a very good cheese.

We managed to get a dried merguez sausage instead of the fresher type that you would fry or grill. It’s very different to have yourself a lamb sausage if you are only used to pork (or sometimes chicken). You also have the spice element with the chilli, pepper and (I think) cumin. These are definitely something I need to pick up from a street vendor should I ever find myself in Tunisia. 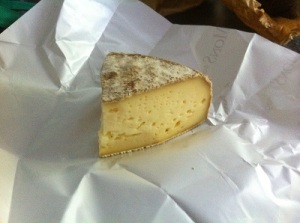 A bit more globetrotting here with this cheese from the French part of Savoy. So apparently a tomme is a type of cheese made from left over skim cheese that is left over, which makes it lower in fat. I wish I had known this when eating this cheese so I would not have felt so frickin’ guilty about having that second big slice.

It’s a very milky cheese with a mild aftertaste. Just don’t eat the rind as that is not too pleasant. As a form of comparison it’s like a stronger and less buttery tilsiter (but that’s a bit of a stretch).

I actually ordered these lamb shoulder steaks in the final week before returning to work (three weeks have passed since then). They are only available at the official Gower Salt Marsh Lamb website and the people who work there are really lovely! When I was ordering my steaks I told the guy on the end of the phone about the book and he had not heard that that they were in it! Imagine that.

As lamb goes, yes, this is on the more expensive side, but this is well worth the difference as long as you buy in bulk. There is a richer taste to this when compared to regular lamb that I can only place as ‘mineraly’. I guess that will be because of the diet of the lambs. It might also explain why it tasted so good with marsh samphire (the taste of which I now really like).

Because I had no other post to put this in

I… umm… feel slightly uncomfortable having this as a tag for this post. Never tell people that you are having faggots for dinner as it either sounds like you are being ultra offensive or about to have some sort of sex party.

In layman’s terms these are pork offal meatballs and are very much a British dish (the name coming from the Latin for ‘bundle’. I guess though this is how language evolves – so maybe we just need to learn to call these ‘savoury ducks’. Or not. That just sounds weird.