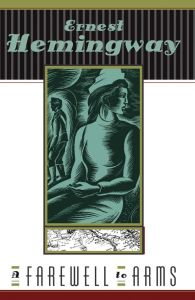 I know that I’ve crossed off a lot of comics in recent weeks, but I have to admit that it’s a little bit ridiculous that it has been over two months since I crossed off my last book… And time wasn’t necessarily because I was read a massive War and Peace length tome. So this week I just picked a book at random from the list and wanted to see where the chips fell.

Randomness really worked in my favour this time, as it gave me a book that I really fell for. It managed to show me two things – that I really should not write off novels set during World War One and that I might be growing into a bit of a Hemingway fan. I mean, this is the second novel of his that I have read (the other being The Old Man and the Sea) and both have affected me deeply as I devoured them.

As wartime novels go, A Farewell to Arms has a major facet that make it an incredibly interesting read. This is told from the perspective of a man who has enlisted in the forces of a foreign nation (In this instance, an American enlisted as a driver for the Italian army). Now, this is not an everyday perspective for a wartime novel and is only because it matches with Hemingway’s experience. This makes for a lot of interesting observations from an outsider’s point of view about the cultures and landscapes of Italy and, later on in the novel, Switzerland.

You also have a deeply human and weirdly gripping story not only about the love between the main character and a British nurse. We see him in action, get injured, go through recovery (with a lot of humorous back and forth) and then his eventual fleeing to Switzerland in order to escape arrest and implied execution. It all marches allow thanks to an engaging and very well-written main character. Sure, at times he can do things we may not agree with, but you are with him all the way to the final moments of the novel where he walking back to his hotel in the rain.

At the time of writing this, the news has come out about the death of iconic authoress Toni Morrison. Since I have still not read one of her books, and there are two of them in this list, I think it is only right that I choose one of these for my next pick. Whether I go for Beloved or Song of Solomon will likely depend on my whim when I am next able to get a seat on my commute.