The threat for a long time was that it would be a day of near constant rain. Hell, for a time there was even some snow predicted. Well we got some serious rain and a fair bit of drizzle, but in the end the worst of it all happened whilst we were on a coach or inside. This weather warning has chased us for the whole two weeks and it pretty much worked out.

So today we went on an organised tour outside of Quebec City. We’d have rather made our way to some of these places, but it’s post-Thanksgiving and pretty much the end of tourism season. At least there was this tour which rather conveniently started out almost opposite the hotel.

Since there was no lunch stop, we had to make sure we had a good breakfast. We headed down into the lower levels and I had a rather nice plate of French toast, bacon and potatoes whilst my husband had crepes and bacon. This would need to get us through until the tour had us back in the city at gone 15:00, which it pretty much did.

We had two things we wanted to see as part of this tour, which ended up being the final two stops after the guide completely flipped the itinerary. Guess it meant that things improved with every stop as the first two were the kind of stops that consistently turn me off doing a guided tour like this.

So we first went to the island of Orleans, which you can see from Quebec City and is set up mostly to be agricultural. The kind of place where all the city’s fresh produce comes from and you might take your kid to go picking strawberries. It’s also got a lot of tree coverage which meant us giving through golden corridors of leaves that would all be on the ground in about a week’s time. 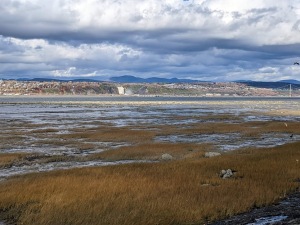 However, we were taken here to… visit a chocolaterie. Not even a big chocolaterie at that. Sure it smelt gorgeous and one of the people on the tour ended up spending $80 on stuff, but this isn’t why we were here. So, to kill the half-hour, we walked a little bit to some kind of promenade walkway to take in some views across the St Lawrence River and take some photos of what this river looks like at low tide. We also got some shots of Montmorency Falls, the (now) final stop on the tour and the reason we were on this bus. 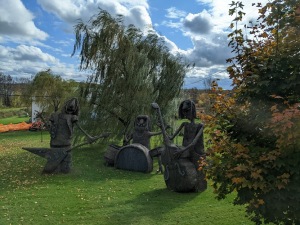 The guide took us off the island and through some rather lovely residential areas. He also reinforced a bit of a point he made earlier when an American tourist tried to make him stop speaking French and instead speak English… that we were in classic French Canada and that very few people in the communities we were now driving through would be able to converse in English. Again, this is a foreign and beautiful land.

Stop two was a copper gallery slash shop. The reason for it being on this tour is that the large copper doors of a church we are visiting was made by the man whose family now continues his work of making copper embossed art. At the back is a collection of embossed silver artwork depicting the life of Jesus from birth to ascension. All brilliant works of art, but also this place is definitely trying to their $30 bookmarks, jewellery and a stunning rooster that is a steal at $2950.

Not too far was the third stop, the first that I was really looking forward to: the basilica of Sainte-Anne-de-Beaupre – the largest church in the province of Quebec. Given how devout this province has been within it’s history, this claim isn’t to be taken lightly – this is a massive church. Also, less than a century old as the previous iteration burned down in 1922 and took a long time to rebuild.

When you are inside, the newness of the church shows. It’s something I’ve seen in all these major Canadian churches. In the older European churches, the walls are littered with religious art of different dates and provenances and there will be slabs on walls and floors about those whose bodies are interred here. This is not criticising or saying older European churches are better, it’s just something we’ve only been able to put our fingers on today.

This is a stunning church though. I think this may end up being my favourite of all those I have seen on the trip and might be the first one I’ve visited where there is allegedly a priest near the gift shop who will bless purchases. Then again, this is one of those sites that receives a lot of pilgrims (Pope Francis himself visited in 2022) and is linked to healings. So it makes sense it would have a way to get your purchases blessed for the sake of healings.

Then, finally, it was the last stop: Montmorency Falls. These falls, which are 50% taller than Niagara Falls, aren’t the easiest to reach in the off-season and are well worth a visit. Honestly, I wish we could have been here for a lot longer than the 45 minutes allotted by the tour, but at least it wasn’t raining!

At the falls you have some options of how you want to view them. You can see them on ground level, you can make a climb up some stairs or you can take a cable car to an upper level and see them from a suspension bridge. We opted for a hybrid of the first two as we weren’t sure what seeing the Falls from above would really bring.

Waterfalls above a certain volume and height are always stunning. Montmorency Falls were especially stunning as all the rain had generated a bunch of smaller cascade falls to the left of it. Also, the jagged nature of the waters descent really contrasted with the smooth curtain of water at Niagara. This is a fall you would not survive a spill over. 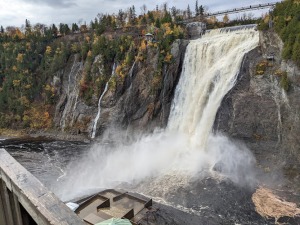 The best of all the views came when we stopped halfway up the stairs (we didn’t have the time to go further) and took it in from the lookout they had built up there. Really was the best way to get a bit closer and just take in the scale of the power on display here. I just need to return to Canada and some of the other amazing waterfalls that they have here.

True to the guides word, we were back in the city centre little after 15:00 which meant we needed to find some lunch right away. I don’t think we’d walked 50 metres before finding a good smelling place for lunch. Sure it was a burger and fries, but mine had smoked meat on it. Also the hub got a venison burger with mushrooms cooked in maple whiskey. Definitely felt like something Canadian only.

The rest of the afternoon was spent back down in the lower areas to finish off some souvenir shopping. I got my final magnet and key chain of the trip, my husband finally found himself a good zipped hoodie and we got some nice soft plushies to give to the nieces. Also, for later, we visited one of the many boutique popcorn shops and got a bag that was, in retrospect, too big for us.

We stayed in for the evening for the first time this holiday since our previous attempt was scuppered by the keycode to our Montreal accommodation getting changed. This meant we were able to watch an episode of Le Maitre du Jeu (the Quebecois version of Taskmaster) live on television.

There aren’t a lot of takeaway options in this area of town, but we did manage to find a place called Mango Tea which fit the bill perfectly. So there I was, sat on the floor watching a Quebecois show with subtitles, lychee bubble tea, a very good lemongrass beef banh mi and some popcorn. I think it’s one of those quieter evenings that I really enjoy.

Tomorrow is, somehow, the final full day here in Canada. Got some really nice things which will hopefully carry me through what will end up being nearly 24 hours of travel. Until then, I’ll have some fish to see and some ghosts to walk.