I think I can call it for now, the old city part of Quebec City may indeed the prettiest area of any city I am likely to visit in North America. I know there is a bit of a European bias going on here, but this is still giving me vibes of like a small city in Western Europe than something on the other side of the pond. Clearly it’s all coming from the French sensibility of it’s early days, but wow it’s a real treat to be roaming these streets all day. 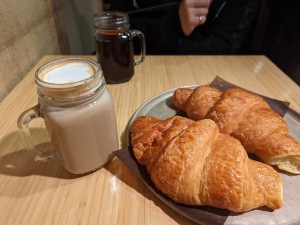 Breakfast was a simple one day. Since we are in what feels so much like parallel universe France, I found us a cafe around the corner where we had a massive butter croissant and I had a pistachio latte. Trying to assimilate so hard that I actually had a fancy coffee drink and, as someone who doesn’t really like coffee, it was pretty good. 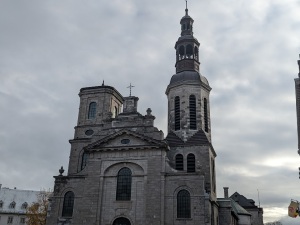 So, the whole point of today was to really see as many of the main attractions in the old city area of Quebec City. Any leftovers being rolled over into some spare time on future days. The first call was made at the Notre Dame of Quebec, which is the end of this weird mini-tour of Notre Dames. 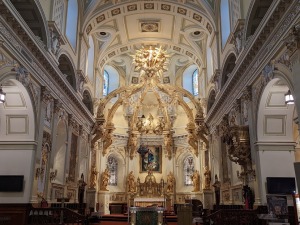 The interiors of all three Notre Dames have been very different. This one with cream walls with any accents being in gold or a very pale blue-grey. The chancel was absolutely beautiful with those gold arches all reaching towards Jesus at the top. What was also interesting to me is just how welcoming this particular church felt, probably helped that there were some nature sounds coming from one of the rooms. Almost feels like Montreal is the church that inspires awe, but this is the one that might inspire more togetherness. 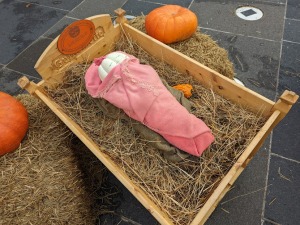 We then paid another visit to City Hall and their Halloween village. Some of the impact is lost in the daytime, but it allowed me to take some pictures of elements that were occupied last night. I also got a better look at what turned out to be a nursery of pumpkin babies. Like these were literally pumpkins in cribs, with blankets and expressions drawn on in Sharpie. Yet, these are some of the cutest non-animal things I have seen for while. Don’t know what is wrong with me. 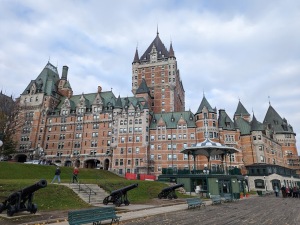 Not too far from here, and visible from most points in the area, is the towering Chateau Frontenac. Inside is a hotel that I would be able to afford without some serious career adjustments. This is one of those buildings that just looks good from any angle and it is appearing in so many of my snaps.

Given how high we are, there are also some beautiful views overlooking the river and over to the neighboring town of Levis. Hopefully we’ll find the time to take the ferry over to Levis and get the reverse of all the photos I took, but that’s assuming good weather (and tomorrow is looking like a wet one). 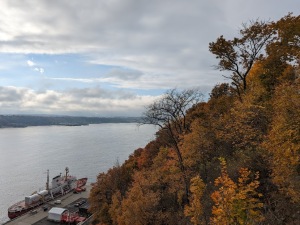 It was more view appreciating as we walked along the Dufferlin Terrace, a very scenic boarded walkway that hugs the end of the hill and gives more chances for good views of the river and the surrounding area. Honestly, despite the rather bleak sky in all the photos it really did turn out to be a nice day.

Up the stairs and a bit of a walk later and we arrived at the Citadel of Quebec. Built as a means to defend the city from American forces, it never had to be used as a defensive position, but it still has an interesting and storied history. It is also still an active military site, so if you want to actually see it, you need a guided tour.

We just missed a tour, so we milled around the attached museum and read up about the history of the citadel itself and the Royal 22nd Regiment that it currently houses. By the time of the tour, we felt pretty knowledgeable – but it was still very much worth it for the lovely tour guide we had taking us around for an hour. 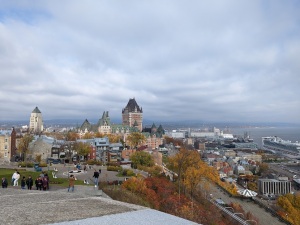 It also allowed us to get some great views from up on high, as we stood next to a cannon called Rachelle. Speaking of cannons, because we were on the 11am tour, we finished just around the time of the firing of the noon shot. So we got to see the preparation, loading and then firing of an actual cannon. That was actually really cool to have experienced. 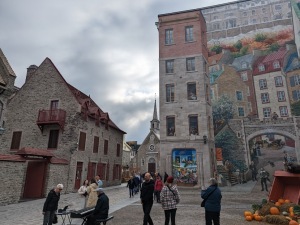 As we needed a larger chunk of time for the afternoon, we skipped some things on the list to be taken up in two days time and instead made our way to the lower lever of the old city, via a lot of stairs. The impression made of this area was immediate in part to a street performer playing one of my favourite tracks from the Amelie soundtrack. But more on this area later.

Lunch was something that I have been meaning to get ever since I found out that Canadians had their own word for it. So it was a Pogo (aka a corn dog) with some creamy coleslaw and a helping of Italian-style poutine (aka fries with a tomato-ragu sauce and the cheese curds… I love this country). With a little room left, we shared an order of pouding chomeur for dessert so we could try something Quebecois. I man this was a bowl of cake soaked in it’s own caramel sauce and then topped with ice cream. It was glorious. 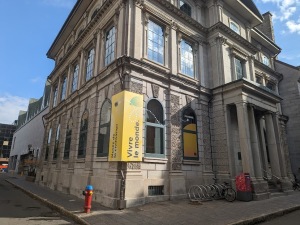 Around the corner was the Museum of Civilization, which we wanted to reserve the rest of the afternoon for. I hadn’t read too much into what was here, but now I have been it feels like this name may be a little bit grandiose and something that feels more apt for the Met or the Louvre. It was still a fun way to spend an afternoon though.

First section we visited was all about the history of Quebec as a province and as a cultural identity. As this is a more modern museum, there is definitely a difference in how things have been framed around the interactions of the white settlers and the First Nations peoples when compared to the older explanations in the Chateau Ramasey. 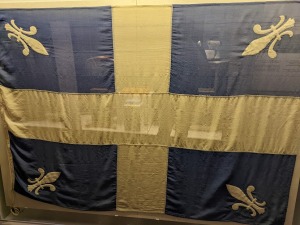 For me, the biggest takeaway was something that the Museum of Canadian History glossed over a bit: the timeline that led to the two votes for an independent Quebec. Like, I understand this a lot more now and can definitely see how emblematic the French language is since the region is no longer as brought together by the Catholic church. I just hope that, for the Quebecois, they are happier to be part of a unified Canada than at that point 30 years ago when the difference in the referendum was razor thin. 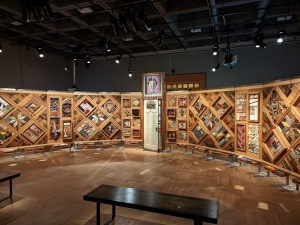 Also among the permanent galleries was an area about First Nations people in Quebec. There was a separate room dedicated to an art piece around the awful impact of residential schools; which we then saw an American tourist literally walk through… as in he thought the door was a usable door rather than a piece of the actual art. Talk about on the nose. I just sat there in utter shock because as a living metaphor it was utterly ridiculous.

Two temporary exhibitions were also available, but the one I want to talk about was all about poo. It’s presented in a very tongue in cheek fashion a lot of the time, but it also really talked about some important issues around egestion, our attitudes to it and how so few people around the world do not have access to sanitation.

We also learned things like how astronauts poo in space, saw a piece about the trouble and stigma faced by those with ostomy bags and then played some poo-themed arcade games. Seriously, a whole room with some games in it that were educational about defecation and poo health. I know it’s a bit of a taboo topic, but what a way to talk about it. I would love it if this exhibition could somehow be cascaded to a bunch of museums around the world as it talks a lot of truths that many don’t want to discuss.

Our day was then finished off with some proper exploration of the Basse-Ville. This meant walking the old world streets and enjoying the beauty of the (rather empty) Place Royale before navigating around the Petit Champlin area with all it’s little shops and restaurants. I feel like when we get some focus on souvenir shopping, we really are going to be spoiled for choice.

Dinner, much later on, was at a restaurant near the hotel which was exactly the type of French Canadian food that my husband has been looking forward to. Also meant we could cross off the final two entries in our ‘to try in Canada’ food list as both could be found in their set meal menu. What a result!

To start with was pea soup, made with yellow peas and rather different to the Dutch pea soup you could probably pitch a tent on. It was the perfect warming dish for what was becoming an increasingly cold evening. The main was tourtiere – a local type of meat pie which is very much the French showing us Brits how to make our own food and in a better way. I didn’t even end up using any of the condiments as there was so much delicious gravy to dip the fries on. 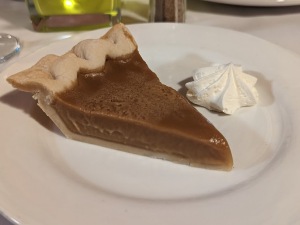 Finishing it all off was a maple syrup pie. I mean the waiter commented that we were going for the full Quebec experience and boy howdy did we go for it. This pie was sweet enough to make me scared for my teeth, but so silky smooth and flavourful that I wanted to appreciate every bite. I think I was about half way done when I noticed my husband was basically finished.

A bit of a massive first day here in Quebec City and tomorrow is us actually taking a guided excursion into some nature… on a day where the rain is set to not cease. We would have preferred to do this ourselves, but so much seems to stop in Canada once they’ve had Thanksgiving. Hey ho, should at least be a fun day if a little wet.