Following Qatar with Egypt is probably the shortest distance between consecutive countries that I have done so far whilst also changing continents. I was thinking, originally, of making something from Sudan so that I could have done both north and South. However, so many of the dishes that I liked the look of turned out to be mostly of Egyptian origins – which begged the question as to why I wasn’t just making food from Egypt.

Looking at a map of the countries that I have already cooked for, it looks like Egypt is really helping me almost complete the coastline of the Eastern Mediterranean. Interestingly Egypt is almost the breakwater between the very strong Levantine cuisine (e.g. Lebanon and Israel) in the East and the similarly strong Magrebi (e.g. Algeria and Libya) to the West. Instead, Egyptian cuisine is its own brand of Mediterranean whose history can be traced along the Nile and into ancient times.

Given where Egypt lays, you are of course going to see a lot of Mediterranean staples. This was the place where, as a nine year old, I first tried falafel and hummus. Had I been a more adventurous child, I may have ended up trying shakshouka or ful medames… but that wasn’t me. I distinctly remember having a pitta stuffed with french fries when were near one of the bazaars. Well I sure am making up for it now and am making something whose name I used to see every day on the commute to work. 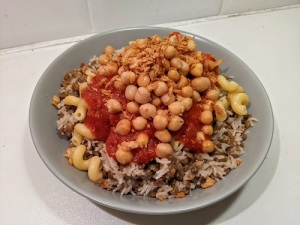 Way back when, before moving offices and changing up my commuting route, I always used to pass a place called Koshari Street. I know that, before lockdown, it was still there serving up Egyptian cuisine – but for some reason I never went there. Maybe because it was £7 for an unknown dish when I could get a pork bun and a noodle pot from nearby Chinatown for less than £3. Passing this every day left the name koshari in my head, so when I settled on Egypt for today’s country it felt like the obvious choice.

Koshari is a street food which is an overload of carbohydrates. The main ingredients you have are rice, lentils and pasta – with a tangy tomato sauce, crispy onions and chickpeas going on top. Following the recipe from The Mediterranean Dish, it is easy to see how this would be something that could be simply served as street food. One you have all the carbs cooked, it is simply a matter of keeping it warm before serving it up in layers.

It is a lot of carbs to have on one plate, but it is all really held together by the tangy sauce and the difference in textures between the lentils, pasta and rice. Typically you are meant to have something closer to macaroni, but they ran out of that so I ended up going for spirali. May not be authentic, but I felt like it brought a bit of whimsy to the dish.

So often with foods, the tradition of a recipe isn’t that much older than the 1800s. I mean take a dish like pad thai where it is reportedly less than a century old and has become emblematic of Thai cuisine. Contrast this with Umm Ali which, by all accounts, has a history going back to the 13th century where some form of this dessert was prepared as a celebration in the royal household after a successful assassination.

Revenge, much like this dish, was super sweet and this decadent dessert must have made for a more than adequate way to celebrate. Granted the version I made, from My Big Fat Halal Blog, uses croissants which is not quite an Egyptian pastry from the 1200s – but the result is an absolute stunner that I have already been asked to make again as the ‘perfect dessert for when we have friends over’. Whenever that is. I hope that by the time this blog post is out I will have had the opportunity to do so.

This Um Ali follows a lot of the similar ideas as a bread and butter pudding, or any dessert that bakes a custard into some baked good. However, the cardamom in the milk base and the use of pistachios and coconut really set this apart. It is incredibly rich though, so it is hard to eat too much of it.

There was a reason I was holding out on Egypt for so long – I just knew it would be a brilliant country to cook for. Next week I am back in Europe with one of those countries I have wanted to do for a while, but had difficulties in finding recipes that didn’t rely on specialist meat or berries. But I got there eventually and hope it can hold a candle to this Egyptian feast.