Like I mentioned with the switch over to the Top 1000 list, there are a number of older albums that I listened to as part of a previous blog. This was back in 2009 … and I think my views on music have changed somewhat. Or maybe not, but hey it’s good to keep crossing these off so for these three weeks will be playing a game of catch-up. 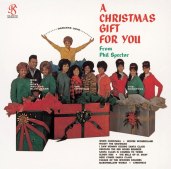 Title: A Christmas Gift For You
Artist: Phil Spector
Year: 1963

I realised that in taking part in this album challenge I would be subjected to some forms of absurdity. However, where I previously thought this would be owned by the high numbers of appearances of butter-spokesman John Lydon, reviewing Phil Spector’s A Christmas Gift For You over the course of a warm summer’s day really does need to take the top prize.

However, since this album itself was recorded during a hot summer in Los Angeles maybe I really am listening to this album at the optimum time. Ok, maybe not. In the end though this is an album just like any other, the fact that this is a Christmas album is merely incidental. Another incidental occurrence is that Phil Spector is now in jail for second-degree murder. Neither of these things really should affect how I judge this album, but we all know they will as I am human after all.

This is the first album that I have encountered on my musical odyssey that can be considered as big production. Phil Spector and his Wall of Sound production method are well and truly resplendent throughout this offering bringing layer after of horns and percussion and god knows what else without ever drowning out the vocals. This thick, decadent production has the greatest presence on tracks such as ‘Winter Wonderland’ and ‘Frosty The Snowman’ where it acts as the perfect accompaniment to the songs playful aspects and inspire merry dancing around the room. Personally the only other Ch as song that gives me the same feeling is Mike Oldfield’s ‘In Dulci Jubilo’ released some 13 years later.

While there are many collaborators on this album the songs featuring Darlene Love shine the brightest with the joy and wonder of the season truly coming across in her performances. This fact is what cemented her role as the singer of ‘Christmas (Baby Come Home)’ as her vocals on this are flawless and emotive, which begs the question as to what became of her singing career. While I could go on praising her vocals on the album’s two best tracks, ‘Marshmallow World’ and ‘Christmas (Baby Come Home)’, I will refrain from doing so through the fear of sounding like some rabid fan girl. This is by no means belittling the efforts of the other contributors as they all provide their own magic to this mix.

The highlight of the other collaborators has to be ‘Santa Claus Is Coming To Town’ where The Crystals hold their own against the backdrop of a barrage of bells and chimes. The fact that this album raised the bar for all Christmas albums to come is no accident, it really is that good. In fact it is in my opinion that there has only been one other Christmas album since that equals the magic of this one, and is by no means one of such production values as Phil Spector provided.

Now that he has been mentioned it is time to reveal the one song featured on this album that has indeed prevented me from giving it a perfect rating. ‘Silent Night’. If you have listened to this album before you will know what I am referencing. To this day I will never understand why Phil Spector felt the need to ruin such a beautifully orchestrated version of my favourite carol. Oh wait I know, it’s the only moment that his voice appears on this album. While this is meant to be a message of thanksgiving it ends up just being plain creepy and as such has ruined a 0.5 off the total rating. This is truly a shame as otherwise I may have had the first 10 on my hands. Oh well, there is always next time.