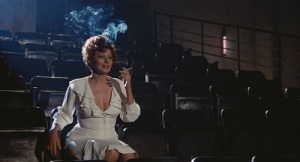 The penultimate Fellini before I finish off the list… in about two years. I decided to keep Juliet of the Spirits as I wanted to save the final Giulietta Masina film to the end, which leaves me with this autobiographical comedy-drama that netted Fellini his fourth and final win for Best Foreign Language Film at the Oscars. Not that he got the trophies as they technically belong to the country of origin… which has always struck me as a bit odd.

Amarcord is one of those films that doesn’t really have a story as such, instead it is a year in the life of an Italian town in the 1930s. We start as spring chases away the winter chill with a stream of puffy seeds and we end in the same way. In the intervening year we see marriage, death, sex, confession and a man climbing a tree demanding that someone fetches him a woman.

The lack of a definitive storyline is the strength and the weakness of Amarcord. Being that this is a Fellini film, there is no argument as to how brilliant this film looks. He sets up some wonderful scenes, like the cinema scene and the snowy roadways, and there are some great laughs to be had – the scene with the tobacconist screams into my mind there.

On the flip side, the lack of a set direction turns this into a two hour stream of vignettes that don’t always work for me. It had me completely for the first hour as we had dream sequences, unreliable narrators and stones being thrown at relatives. Then it began to lose me as the pace and the tone changed. Like, I was never able to emotionally invest too much in Titta as a main character so the final part of his maturation arc didn’t hit me as hard as it should… given that he is the Fellini analogue.