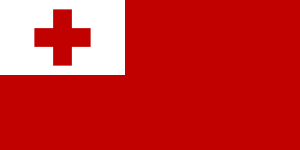 There aren’t a lot of times where I can make Oceanian cuisine due to the lack of countries, but that does mean that the countries become very easy to compare. It’s going to take a lot to beat the Chicken Micronesia in the deliciousness stakes, and I am not counting the hokey-pokey ice cream here as that would be unfair. So let’s see what Tonga has on offer.

Tonga is the in the Polynesian region of Oceania, the largest of the three islands regions which also includes New Zealand and the American state of Hawaii. In terms of sheer area, the Polynesian Triangle is vast and really doesn’t contain a lot of land area. For almost a millennium, a large area of the triangle was ruled by a Tongan Empire with parts, even crossing regional lines and having influence in neighbouring Fiji. This has nothing to do with food, but I just found it incredibly interesting.

The recipe I picked today is a variation on a theme I have found in Oceania and could have also applied to another country – but since I already have something in mind for them (as long as I can locate the right spices) I opted to cook this for Tonga.

So, I ended up following a recipe for this on Food which was brief to the point that I had to do some research into what the oven temperature was. In retrospect I probably could have found a different recipe, but there is only so much you can do when you have already lined a cake tin with foil and cabbage leaves.

This week’s dish of kapisi pulu has some similarities to the lap lap that I made for Vanuatu to the point where my life would been easier if I had made this outside of lockdown and instead used banana leaf as a wrapper. The filling is made of a mix of coconut cream, tomato, shredded cabbage, onion and tinned meat – in this instance corned beef. I don’t think I have had corned beef for many a year – the only other tinned meat I have had vaguely recently being spam.

I served this with some sweet potato mash, which worked remarkably well. Probably won’t find myself making this again due to the hassle of making the leafy wrap and because it tasted just okay. There are plenty of other things that I have made for this challenge that are better and don’t require the use of metal ring supports to construct it.

Next on this challenge, my aim is to make my first South American dish for over a year. I have had to get some dulce de leche on special order and am living in hope that it arrives soon so I can make a rather scrummy looking dessert… and that’s it as the jar is pretty much all I need.