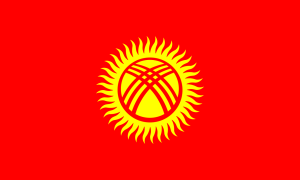 At nearly a year, I felt like it had been way too long since I last cooked something from one of the former USSR nations. It’s been even longer since I last cooked for one of the Central Asian ones – where I made beshbarmak for Kazakhstan. Considering I have still many recipes in my Samarkand cookbook for other nations in this region, I wanted to prioritize Kyrgyzstan. Also means I no longer have to deal with Google correcting me whenever I spell this country’s name wrong.

As I said before, Kyrgyzstan is a country in Central Asia that formed after the collapse of the Soviet Union. On a map, you will find it with two massive neighbours: China to the east and Kazakhstan to the north. With these nations nearby, and the long history as being on the fringes of the Silk Road – their cuisine has been greatly influenced. In fact, the national dish in Kyrgyzstan is shared with Kazakhstan – beshbarmak. Since I have already made this, I needed to find something else.

There was one other option I thought about going for. It’s a dish that can be found in many nations in Central Asia, with there being a large number of variations depending on the country. My Samarkand cookbook, for example, appears to be for the Uzbek version which has more spices and sauce compared to what I ended up making.

So I made laghmen – a traditional dish of the Dungan and Uyghur peoples that have large populations in Kyrgyzstan as well as neighbouring China and Kazakhstan. One of the key things about laghmen is a simple and eggless noodle. I did not do this. I am still in recovery and trying to get back to some degree of normality, so I made sure that the noodles I got were ‘free from’ and so were just flour and water (plus preservatives). At this point, I have now made my own noodles a few times so no longer feel the pressure to prove that this is part of my toolbox.

For a recipe, I ended up following the one at Diaries of Travel Inspirations as it seemed to look authentic – even if I went for pre-made noodles. One difficulty I had was that this recipe made no mention of amounts of seasoning to go into this (it even just said ‘herb of choice’ so I went for marjoram as I couldn’t find the parsley). This meant that the initial serving that I photographed was a bit bland.

Luckily we had enough for a second helping and I thought I would just follow the standard French advice of salting the food properly – and wouldn’t you know, all this was missing was salt in order to actually make the flavours sing. Ended up going from disappointment to thinking about how I would swap in orange peppers for green peppers should I make this again. So yes, the power of salt.

The next food country is going to be an important one, the one where I reach 100 crossed off. By some really odd coincidence, this landmark will be occurring around the same time as my husband’s birthday. In previous years this has meant he gets to pick the country, which previously have been Lebanon and his home nation of the Netherlands. Big boots to fill, but I know he’s picked a country that should have some surefire winners.