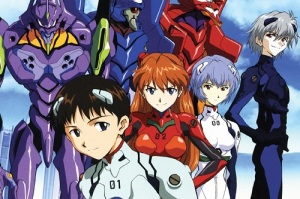 Just to get this out of the way at the beginning. I have yet to see The End of Evangelion for the parallel ending to the anime. I have also not seen any of the Rebuild of Evangelion films  – although I hope that the fourth and final one of those will be finally released by the time this is posted. I fully intend to devour the movies within the Neon Genesis Evangelion franchise as I need to try and understand more about the mythology behind this, which is not something I would have said had this series ended after 10 episodes.

Other than Cowboy Bebop, I cannot think of an anime from before 2000 that comes more recommended. Sure, there are those like the Gundam series that have been influential, but I feel that Neon Genesis Evangelion has a litmus test for getting to know the artform. The absence of this from the MyAnimeList was one of the reasons I changed over. I guess that the reason behind the lower rankings is because of the ending and that, as a series, it only kicks into high Twin Peaks gear in the final quarter.

Set in an alternate timeline where an extinction event has lead to mankind to fight against otherworldly beings designated as ‘Angels’ Neon Genesis Evangelion starts life as a pretty standard mecha series. Sure, the huge amounts of religious theming made it a bit different from the get-go, but I remember myself and the hub getting five episodes into this and getting a bit confused. Like, the robot fights were fun n’ all, but it was such a melancholy robot show with high school drama thrown in. Nothing too special.

We changed our tune soon enough though. Where it took us nearly two months to watch the first half, we demolished the second half in about two weeks. I can’t remember the last time where a series I watched has such a substantial change in my need to consume it once I was a substantial way in. I think it might have been Made in Abyss, but that’s only in terms of percentages. In terms of episode count, this would be the longest since The Vampire Diaries where it took almost a whole season of 20+ episodes before I demolished it voraciously.

Neon Genesis Evangelion is brilliant. I say this still not completely understanding what the hell was going on in the two-part finale, but I know that’s what the film will help to clear up… ish. I still have my problems with having a protagonist that is so passive to the point of having an early episode where you just want to yell at him Asuka style. Now I know how it ends (again, ish) I know that I will need to see this again and see how I view these earlier episodes.