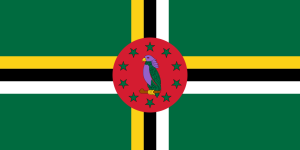 Originally, I was meant to be doing my halfway European country. However, I managed throw my back out – so have delayed this for a little bit whilst I rest up. There has been a fairly large actual gap between making the food for this post and the previous post (thanks again lower back), which is already making me slightly regret getting back to this post-a-day blog pattern.

Anyway, I am icing my back now and still finding myself getting confused between looking up things for Dominica and the Dominican Republic because they share a demonym. Having all things for both of these countries being referred to as ‘Dominican’ really has made researching dishes fairly difficult. Thankfully there are so many wonderful people online who have made Caribbean recipe databases that I can peruse and cook from.

Like many nations in the Caribbean, Dominica has callaloo as part of their cuisine – for this country in particular callaloo soup is their national dish. However, callaloo can also be used as a side dish for other nations – so I wanted to make something that wouldn’t necessarily be a side dish, but also sounded delicious. I’ve had some good times cooking for the Caribbean nations that are part of the British Commonwealth and I knew today would continue that streak. 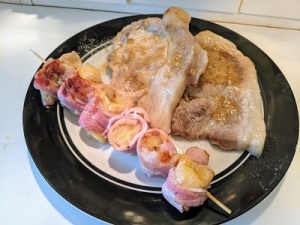 Like I said above, finding a website that is essentially a Caribbean recipe database with country tags has the potential to be a real game changer for this latter half of the cooking challenge. So a big thanks to all the contributors to Caribbean Choice for this recipe to make pork chops with bacon-wrapped bananas. I think this may be a recipe that could also be found on other nearby nations, but I’m not going to argue.

The star of the plate was, obviously, the bacon-wrapped bananas. The pork chops were nice enough – although would probably be even better inside a crusty roll – but nothing could compare to the joy that was this side dish. I mean, when I think about it, this was always going to be a home run. So many things taste better with bacon – so why not bananas? Well exactly. I was to find myself in a time warp and having to bring a dish to an Ice Storm era potluck – I think I know what I would be bringing.

Okay, so I am now in the second half of this world cooking challenge and it’s pretty exciting to see the countries I have left to cook for. I mean there’s China, Spain, Ethiopia, India and many other major food nations left. It gives me a lot to look forward to – and I will continue to do so as, for my next country, I’ll be hitting the halfway point for the European countries. My back may not be recovered, but hopefully it’ll be delicious enough to distract.