This is definitely one of the weirder years for Oscar movies. To have a ceremony in 2021 where a Best Picture nominee had it’s premiere at a festival in late 2019 is a bit strange. It all comes down to the year of that all important release in the US I guess and has allowed for this different film about a drummer losing his hearing get a chance at the big awards.

As enamoured as I was with Chadwick Boseman’s performance in Ma Rainey’s Black Bottom, I cannot help but look at Riz Ahmed and think that he would have had a better shot at the Best Actor trophy is Boseman was still alive. They are very different performances and like with all things film, it comes down to personal taste. For me, I think that Ahmed as this drummer dealing with healing loss is the better performance overall – especially as it doesn’t feel like something made for the stage.

If Sound of Metal is to win something, it has to be for Best Sound. I know there are some issues with the broad cuts this film makes about what it means to be deaf or hearing impaired, but the way that the sound team let you into the world isn’t just brilliant, it’s disconcerting as a hearing person. Going between the wider world and the world that Ahmed’s character hears is so well done that I found myself involuntarily crackling my own ears to make sure it wasn’t just my own ears playing tricks on me.

Despite the broad statements and the rather gut-wrenching rejection he gets towards the end, Sound of Metal feels like it could be the start of an important conversation about what it means to have hearing loss and how we as a society can be better equipped at proper integration. It is sure a step forward from Children of a Lesser God where Marlee Matlin’s character is seen as obstructive as she wants to communicate just through sign language rather than speak. Forward. Always forward. That’s the way to go. 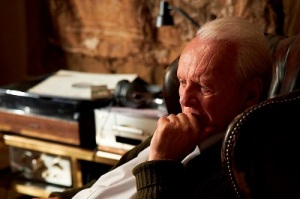 If you had told me that The Father would have ended up being one of my favourite films of the Oscar nominations I don’t think I would have believed you. Of the eight nominees, this was the film I was looking forward to seeing the least. Sure, it has one of the better aggregated review scores of the group – but it seemingly had all the trappings of Oscar bait that I dislike.

I was wrong. Sure, The Father is about an older man with dementia and how it effects him and his daughter. This is not the first film about memory loss to get nominations at the Oscars (see: Amour, Still Alice and Iris), but it feels like a rare breed to actually get you empathize with it rather than sympathize.

Dementia is meant to be a warren of confusion for those afflicted and The Father, thanks to Zeller’s script and direction. Everything down to the choice of clothing and props help build the story and the revelations until the final devastating ending. If I was in a worse place, this film and that ending would have had me in tears. Then again, when I was watching it I had this overwhelming urge to be strong for my mum who was watching it with me. Maybe had I been on my own I would have been in floods.

It really is hard to argue against Anthony Hopkins getting a second Oscar for this. He is beyond brilliant as his namesake in the film. Olivia Colman too, again, brings another great performance as his daughter who is going through all of this with him. I cannot see Hopkins getting the win because of the groundswell for Boseman, but this should hopefully pick up a screenplay nod so that Zellar can walk away with an award himself for this brilliant twist on an Oscar favourite.