List Item: Listen to half of the 1001 Classical Works You Must Hear Before You Die
Progress: 91/501 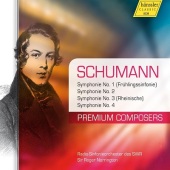 Okay so I am becoming a bit more regimented to make sure I actually start making some headway through this classical list – which makes this another week, another symphony. At least one thing I can say today is that, thanks to Symphony no. 3, “Rhenish”, I have heard my first Schumann piece. I mean, sure, I probably heard him somewhere (apparently in Frasier) but this is the first piece I have sat down to listen knowing it is by Schumann.

The issue I have, however, is that as nice as this piece is – I am not sure what there is to say about it. It’s a symphony in five parts that has a very joyous overall feel to it. Apparently it was inspired by a lovely holiday that Schumann took with his wife, which probably explains the positivity in it.

Other than that, I can’t really comment about how this is structured compared to other symphonies. All I know is that I like the strong presence of woodwinds and the lighter strings compared to some of the darker more piano and dark string symphonies I tend to hear for the 1001 list. The fourth section is a bit of a departure from this more positive outlook as it becomes a bit more solemn in order to bring the idea of an archbishop being promoted to cardinal, but there is still this general feel of uplift.

After the new Sufjan Stevens album gave me anxiety, this was the right classical piece to have in the chamber.