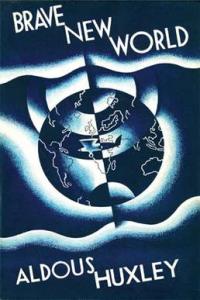 At school I studied Nineteen Eighty-Four and A Clockwork Orange, the latter as part of my AS Level coursework. In both instances, Brave New World was mentioned as another exemplar of dystopian literature and yet, despite liking both of those books, I never felt the urge to read it until this week. Well, better late than never I suppose because I devoured this book incredibly quickly.

When the initial chapters are read out, I bet they sound like a precursor to all those science podcasts that I should be listening to. In order to get us invested in this world of his creation, Huxley needs to do a lot of set up right from the get go. He does this and yet makes it incredibly engaging – even if he uses a bunch of words to describe the shapes of the heads of the different classes of people that I had no idea even existed. Same to for the word ‘freemartin’ which I am unlikely to hear ever again.

What Huxley also manages to do expertly is create a world where not only is the path from now to then feel possible in terms of history and how crap human nature can be, but you can also see how humans would end up incrementally agreeing to these things. Hell, so much of what he wrote about was in reaction to fears at the time of the society that we’ve ended up becoming. In some ways we are still on track to become this society reliant on dopamine hits, but are luckily not far enough that we have no desire to read books. Well, some of us anyway.

I’ll be honest, the thing I loved most about this book wasn’t the story. I mean the story was good and all, but it works because it helps further flesh out the world and hold that mirror up. Honestly, I don’t think I ended up caring about a single character in this book – but I don’t think that really matters. In the end, everyone in this book is various shades of messed whether that be through their conditioning, their zealousness or their enjoyment of their own sense of superiority.