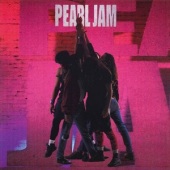 The only reason that Pearl Jam has taken up some real estate in my mind prior to listening to Ten was a sight gag in the X-Files episode of The Simpsons where the bully Jimbo Jones holds up a placard with something about Pearl Jam tickets on it. That’s pretty much where it ended for me until I saw them appearing so high on this list, where I made some assumption that they would be a hard rock outfit and just left them until I has to do an album from the 1990s.

I gues that this albums list just finds more and more ways to put me in my place about making musical assumptions. It also shows me just how 1991 was such an interesting year in music as here you have both Pearl Jam and Nirvana coming out with similar sounding grunge-style alternative rock records at the same time – but as Nevermind was scheduled for release first Ten was seen by some as a bit of bandwagoning. There but for the grace of God.

Ten is proof to me just how much my musical taste has broadened thanks to doing this list. I enjoyed Nevermind when I listened to it way back when, but now my first listen to Ten (much like my first listen to The Downward Spiral) has led to a far more immediate like. I’m a few days in and finding it to be a good album to help with some of the angst I am finding at work right now. Seriously, I swear we never grow up.

There’s hopefully more rock of this type left to listen to, but I think I’m going to have to back into more uncertain territory for the next album. It’s been such a good run though in the last few weeks. A sign that there may still be future favourites left to discover.