Yes, we really could have spent a few days longer here. It’s one of those stupid balancing acts that you have to play with the number of vacation days you have and which place best matches that number. With Seville, I think I hadn’t banked on their being so much to see here outside the Lonely Planet item and maybe a few museums. Goes to show just how full of surprises Spain’s fourth largest city is. 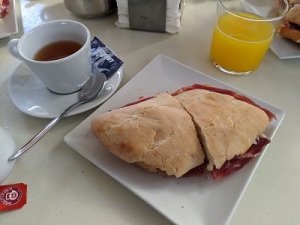 Today was the last day, which meant we had the morning and early afternoon to mop up the items from our original itinerary. A late breakfast of tea, orange juice and a toasted roll with Spanish ham and tomato was exactly what was needed to help set us up for the day and so we were off for a final attempt to get into the cathedral. 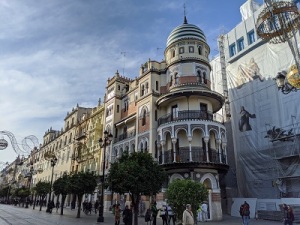 Since it was the final day with not much on, it really did allow for greater appreciation of the buildings in the old town area. Like with certain areas of London, this section of Seville really pays dividends if you just crane your head up a bit. Some Muslim inspired archwork here, a beautifully decorated turret there. All things we couldn’t see lit up by Christmas lights looked wonderful in the blue skies and warm sun of this December morning.

Despite there being a long queue, the size of Seville Cathedral (the largest cathedral in Europe and one of the largest Christian places of worship in the world) is so cavernous that the masses are quickly diluted once inside. It felt remarkably empty, with the many decorated alcoves being devoid of onlookers or barely populated. 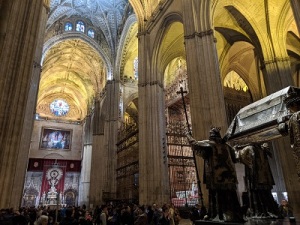 In the end we spent over an hour and a half here because there was just so many different things to see. For one, you have the tomb of Christopher Columbus who – whatever your feelings towards him and his actions in the Americas – is such an important figure in Spanish history. The way that his tomb is placed, held aloft by statues of pallbearers, has his body on the march to the main alter – which is a cool image once you notice it.

Sadly, a lot of the elaborate altarpieces and chapels are behind iron grates – presumably as protection – but there’s so much scope for pictures as long as you are to strategically position yourself or your phone/camera.

It’s also worth noting that, on this day, the sun was shining so brightly in the sky that the stained glass on the eastern side of the cathedral was casting large coloured swatches across the beams and other sections of the interior. Made me think back to the windows of the Sagrada Familia and how this felt like a gothic cathedral version of what Gaudi is trying to achieve.

You can’t come to the cathedral without a trip up La Giralda – the giant tower that started life as a minaret back when a mosque was originally founded on this site. Thankfully the steps are minimal due to 34 ramps and then 17 steps at the end. You end up so high by the end of your climb, which makes the views up here some of the best in Seville.

Being up here was like Montparnasse Tower in Paris, in that I got a chance to see the greatest hits of the different sites I’ve seen over the last few days, in one direction was the brilliantly bizarre Metropol Parasol where we could see individual people roaming along the folds and enjoying the many views. From another side, we could see sections of the Alcazar and it’s gardens as well a glimpse of the Plaza de España. Goes to show now walkable this city is. 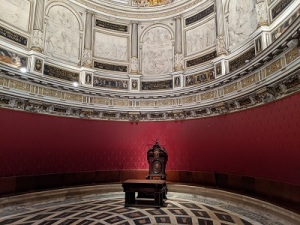 We would have spent a bit longer at the top of La Giralda, but the wind suddenly kicked up to the point where people were getting rather wobbly. So, we descended the ramps and finished off our visit to the Cathedral with a walk through the treasury and the vividly red chapter house with its exceptional acoustics. I know I’ve probably missed out a lot of things in here, but it’s just so big that you end up getting a bit lost. 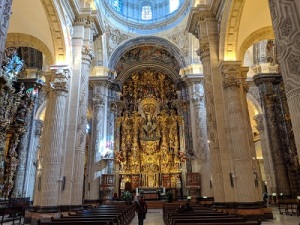 Tickets to the cathedral came with free same day entry to the Iglesias del Divino Salvador. Since we had a little time to kill before we had to be off to the airport, we figured that this would be a good way to spend a little time. Oh good grief, this was a beautiful church whose front facade I forgot to photograph and instead just focused on the, now fairly empty square where we are churros a few days ago.

Inside this church, choral music was playing and all the treasures were shining so brightly it was like they’d been given a fresh coat of polish. I had one of those moments where I felt a bit short of breath and covered in goosebumps, some might have considered that a religious experience – to me it was like sensory overload combined with ASMR.

Every alcove was full with statues and beautifully crafted and shining pieces of metal work. It’s really hard to pinpoint specific ones, but there were some elements – such as a brilliant carving of a lamenting Christ and one of the most beautiful Virgin Mary pieces I’ve ever seen – that are likely to stick with me. 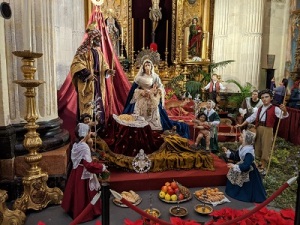 They also had a Nativity up, made of all the usual suspects and some interesting additions like a cat and a family of quails. This guarded one of the two entries to the sacristies that took you behind the main alter and had some interesting treasures such as reliquaries and a vivid red-eyed statue depicting Mary as the Lady of Sorrows.

And that’s it for this brief sojourn to Seville. We went from the church to the airport via our hotel to pick up our luggage. A late lunch was some locally available Burger King items in the departure lounge as we watched our plane getting more and more delayed (in part to the massive thunderstorm that had hit earlier). We didn’t necessarily get the holiday I expected that would be filled with Christmas markets, as the markets are pretty tiny and non-Christmassy compared to what I’ve seen in Munich, Vienna and Riga – but it’s been a lovely long weekend.

As of the moment, I have no idea of any future holiday destinations to come – so I had better get thinking so that I have something to look forward to. I’ve definitely been spoiled in 2019 with trips to Paris, Korea, Hong Kong and now Seville. Cannot help but wonder what might await in 2020.

1 thought on “Christmas in Seville: Day 4 – Finally The Cathedral”