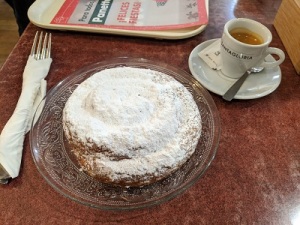 Lots of little things done today, but it all started with a light breakfast of espresso and an ensaïmada from the cafe/bakery around the corner. We realised that lunch would only be a few hours away, so why not go for a regional(ish) pastry that I had never seen before.

To get to our first stop of the day, we had to make our way along the river and back into the Parque de Maria Luisa and finish off the final section that we hadn’t explored in our first afternoon. This particular area is called the Plaza América and, like the Plaza de España, was constructed for the 1929 Ibero-American exhibition. These pavilions have since been converted to other usages. Our destination, the Archaeological museum, having previously been the Renaissance Pavilion.

Regrettably the basement containing the pre-Roman era golden treasures was closed because of ‘technical issues’ (ain’t that just the way) so we made do with the ground floor. Entrance was free because, for now, we’re both EU citizens – you can’t really argue with free entry. Also, the set up of the museum itself was beautiful with many big rooms with well set out treasures. 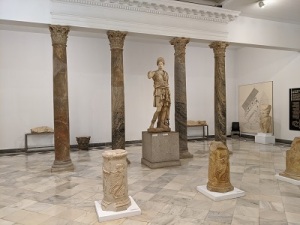 Two of the rooms really stood out for me. First was Room XIX with the incredibly well preserved statue of Diana set in front of columns. This led directly into the other, and more spectacular Room XX which is a grand rotunda with large statues of Trajan and Hadrian (who were born nearby) and busts of many other Roman emperors. Then there’s the large mosaic in the middle, which just ties the whole room together. Who put this together deserves some sort of raise. 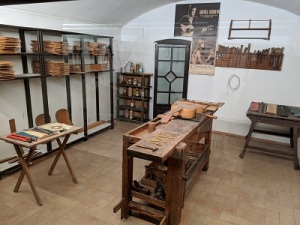 We were done with the archaeological museum earlier than expected, so we popped into the opposite Popular Arts and Traditions museum. Its essentially a museum that has a number of exhibitions to demonstrate how those who worked in different traditional occupations worked. So you have example workshops set up for guitar makers, goldsmiths, pottery decorators etc as well as some example works. Interesting enough for a quick and free (thanks EU membership, I’m going to miss you like crazy) visit to get some more context of the region.

On our way to lunch we, once again, went by the Torre del Oro and actually paid to go up to the top. You get some great, views of the Centro and Santa Cruz area from up there. It really shows off just how big Seville Cathedral is too. I hope we actually get to go in tomorrow, else I’m going to be so disappointed. The tower also had a small exhibition on the naval history of Seville, but we were here for the view so marched past it. 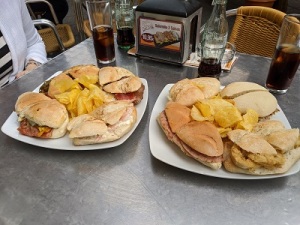 Lunch was originally going to be over the bridge and at Triana Market as so many guides had recommended it. However, it’s Sunday and despite it technicality having opened an hour earlier, nearly everything was basically closed. So, not to be discouraged from at least having one meal in Triana, we found a place and ordered a various bunch of little bocadillos and just shared them. Truly, this is right up my alley and I wished I had the stomach space to have tried more from the menu.

Fuelled up, it was back over the bridge again as we were going to visit the second of the three big things I wanted to see whilst in Seville (the final one being the cathedral). They go by two names: the Metropol Parasol or Les Setas de Sevilla. It’s a giant wooden mushroom-like structure that is stunning to look at and gives similarly great views of the surrounding city from the top.

Considering all the old things that I have seen in Seville, there is such a big contrast when dealing with something so modern. I can see how it might polarise opinion within Seville, but I absolutely love it. It’s bizarre, whimsical, functional and had all the unique hallmarks of what makes a great landmark. Also, it has the superlative of being the largest wooden structure in the world. It’s one of those essential things to see when in Seville.

After a hot chocolate at they top of the wooden mushrooms, we headed off to the first of the two remaining stately homes that we wanted to hit up (the first being Pilate’s House yesterday). Since it was the furthest out, we first went to the Palacio de las Dueñas.

This is one of the private residences owned by the Duke of Alba and is one of those places where you manage to forget that you are in the middle of a major city. The lemon tree garden is especially beautiful to both see and smell as you wander around seeing statues and more citrus trees that you would know what to do with. It’s probably the most zen part of the residence, give the rather ‘eclectic’ art collection on display which includes a painting of rather stressed kittens playing instruments and a vase with demonic looking babies on it. 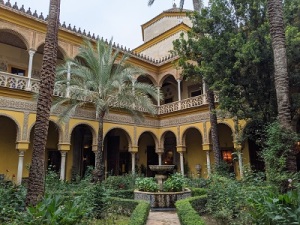 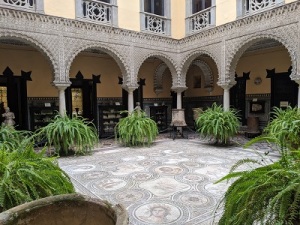 Next was the Palacio de la Contessa de Lebrija. This is a smaller residence bought by the Countess of Lebrija in 1901 who took it upon herself to remodel it almost entirely and fill it with her own increasing collection of artwork from around the world. If the tour we got of the first floor is anything to go by, where we saw her sticking plates to Stars of David on the ceiling, she was a bit of an eccentric and probably what I would have been like if I was a single aristocrat in that era.

Two things are particularly notable in this house. The first is the amazing yellow and blue tiles on the staircase. I have seen many an example of a tiled surface over the last few days, but this staircase really is in a league of its own when it comes to audacious colours. The other major things of note are the ancient mosaics that the countess had transported and laid in her residence. She even went as far as to completely remodel the walls of rooms in order to keep this mosaics whole. That is ridiculous money right there.

After this residence we went back to the hotel for a bit of a recharge and then headed out to see a flamenco show at the Teatro Flamenco Triana. My word. I’ve only seen snippets of flamenco when it’s part of scene in film and TV – which does not adequately prepare you for what it’s going to be like in real life. We were in the front row which meant a lot of seeing exactly how fast the feet were moving and a lot of uncomfortable eye contact. The hour flew by in an instant and don’t think I will ever understand just how the feet can move that fast.

Given it was late on a Sunday, a lot of the tapas places in Triana that we wanted to hit up were either full or shut – so we followed TripAdvisor until we ended up at the restaurant next to the hotel. Go figure, it was a brilliant really great place where I had butifarra and egg for a main and then torrijas for dessert.

When I write these posts, I try and think of a thread or a theme that unites a bunch of the activities together. To be honest, I can’t think of one today because of how eclectic the different things have been. Guess it just goes to show the number of different sides to Seville you can see today. Shame that, given it’s a Sunday, the churches were pretty much off limits. That’ll be our final morning/afternoon then. Knowing what I know now, we probably should have stayed here for longer.

1 thought on “Christmas in Seville: Day 3 – Palaces and Les Setas”