Well, today was very close to taking the title of most steps walked on this holiday, clocking in at over 38k. Actually, it’s only second – the most steps, unsurprisingly, occurring when we climbed Hallasan last week. I’m kinda amazed that there’s still this much left in these legs, but boy am I glad.

Today the aim was simple, to see the Royal Palaces of Seoul. There are four main ones to see and you can see all of them (plus a shrine that we’re seeing tomorrow) for less than £7. It’s amazing value for money and we are sure going to make the best use of this. Just a note before continuing, best efforts have been made to get the spellings of these long names correct.

Right, so we started our day at Changdeokgung Palace. This is probably the second most popular of the four, but it’s the one on the Lonely Planet list AND it features a garden section that is usually tour-only – so we tried to ensure that we were there on time to get as early as tour as possible, which is what we did.

This was the main palace of the Korean royal family for nearly three centuries, which explains the large area that the palace complex encompasses. The most impressive room, as with all the palaces, is the throne room where all the history I have on-boarded in the last two weeks began to recognise elements (like the 5 mountain peaks on the backdrop), which was cool. 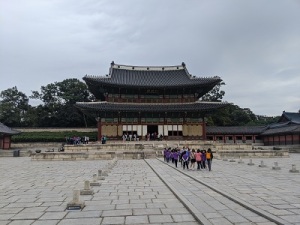 As we were here fairly early, there was no issue roaming around taking pictures of the buildings other than constantly bumping into the same French tour group at semi-random intervals.

Then we got to the main event of this palace, a tour of the Secret Garden given by a wonderfully sarcastic and sassy Korean tour guide. This area makes up the majority of Changdeokgung and the whole thing has been built following the natural layout of the landscape. This means that there are a fair share of ups and downs as you walk around, which turns it into a number of smaller gardens that are perfectly landscaped.

This really was a beautiful place to walk through with the ponds, streams, pavilions and other buildings working in harmony with the foliage. The tour also included a walk through a gate that was so labelled that walking through it will mean you don’t grow old. So fingers crossed guys.

Next door to Changdeokgung is the next palace, the similarly named Changgyeonggung Palace. This palace was originally built as a place for the first Joseon king to retire to after he passed on the role of king to his successor. As a palace to visit, it’s a bit of an odd one as so much of the original buildings were demolished in the early 20th century by the Japanese who turned parts of it into a zoo and removed it’s status of being a royal palace.

Like Changdeokgung next door, Changgyeonggung has a large section devoted to gardens, including a rather sizeable greenhouse. This was also the only palace where I saw wild animals, well if you can include feral cats into that label. As you wander around you’ll also find an old observatory that would have been kitted out with astronomical instruments of the time.

The main throne room, known as Myeongjeong-jeon Hall, is like a scaled down version of the throne room I saw in the previous palace, down to the decoration used on the ceiling which includes two golden flying figures and a lot of flowers.

I’m going to skip ahead a bit from here to lunch which was at the Tongin Market. They have a interesting quirk here, in that you can pay just over £3 to get a pile of 10 tokens that you use to pay for food in the market itself. Things typically cost 2 or 3 tokens, but some things did go as high as 5.

The hub and I worked together and so we shared a whole bunch of different foods including: Korean sausage (or sundae), japchae, fried chicken, rib meat and some tteokbokki. If one of these suddenly popped up near where I worked, I don’t think I would ever get my lunch anywhere else. The value for money is astonishing and I wish that we’d clubbed together to get two of those hotteoks now.

We took a bit of a detour on the way to the next palace which meant we got to see the Blue House – the official residence of the South Korean president. The setting, with that mountain in the background looks so idyllic. Then I remembered the story our tour guide told us yesterday about how North Korean assassins hid in the woods on that mountain behind the Blue House as they failed in their attempt to kill the then president. Still though, it’s pretty damned beautiful.

Not too far from the Blue House, is the main visited palace in Seoul. Gyeongbokgung was the main palace for the Joseon Dynasty back when it was built in 1395 and, like so many things, was burned down by Japanese invaders, restored and then demolished (again, by Japanese invaders) and then restored in modern times. The restoration project is still ongoing, with one building that we saw having been rebuilt but now is awaiting ornamentation. There are so many beautifully restored buildings in the Gyeongbokgung area (a lot of them having been designated as National Treasures), but there’s two buildings that were breathtaking.

The first of these that we saw was the Gyeonghoeru Pavillion. It stands just off-centre in a large pond, where it just looks like it has been tethered to the side and is ready to float out at any moment. The pictures really don’t do it justice as there are no people for scale, but it’s big. But not as big as the other beautiful building.

This is Geunjeongjeon Hall. Rebuilt as part of the late 19th century restoration work, this behemoth of a building is likely to be the largest Korean throne room that I will ever see. Also the busiest, with people swarming at the front to get a good look inside there are as others in rented traditional costume pose for photos on the steps.

We had a good look around all the buildings at Gyeongbokgung before leaving via the exit that takes you to the National Folk Museum of Korea. We didn’t look inside, but instead we came that way so I could get a good look at the tall pavilion building that I kept seeing on the horizon. Maybe next time we’re in Korea, we might go inside.

Next was a bit of a walk away, but as it worked well last time, it was time to visit one of the temples that I put on the to do list. We weren’t disappointed and, again, felt like we got very lucky.

This is Jogyesa Temple and they like to decorate their grounds with seasonal flowers. Since it is October-November time, everything has been decorated with many many different colours of chrysanthemums. In some areas, the fragrance from the flowers was really quite lovely and helped to create such a welcoming atmosphere at the temple.

There were so many flower-covered sculptures that it was easy to forget that we were to see a temple. Like many other temples, you are asked to not take pictures when standing inside, but outside from a distance seemed fine enough. Inside the temple itself are three large golden Buddha statues which looked beautiful in the warm light provided by the candles. I’d love to come back here when they are celebrating a different flower, as I’m curious what they did previous when they decorated everything with lotuses. 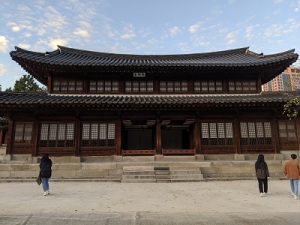 This then left us with our final palace – the Deoksugung Palace. This is the more unusual of the palaces for two reasons. Firstly, the grounds of the temple includes a number of modern art installations that really contrast with the older style buildings.

The other weird thing, is how modern western things were included as the penultimate king of Korea (who was also the first emperor) liked them. This means that rooms actually have electric lights and he built, as his sleeping quarters, something in a European style right down to the columns. It’s another weird contrast, especially as this is liable to be the only time I see a traditional looking Korean palace building and a western style building next door to each other, within the same palace walls.

By the time we’d finished with Deoksugung Palace, the sun was setting and it was dinner time. Since we had time before our final activity, we found a Korean barbecue place in Myeongdong and had some rather delicious barbecued pork and mushroom. I really need to find a good Korean barbecue place when I am back in London as I feel like I need to try it with beef and some more vegetables.

And that leaves me with our final stop of the day – the Nanta theatre in Myeongdong. Nanta is the longest running show currently in South Korea and is what happens when you take Stomp and set it in a kitchen. I don’t know if I’ve enjoyed myself in the theatre this much for a long time. It was a great mix of music, circus tricks and humour that meant you were never too far away from clapping. The fact that it’s mostly non-verbal made it even better and explains why a lot of people in the audience were tourists. This is definitely something I’ll be recommending.

Tomorrow is the last full day in South Korea. I really don’t want to believe it. As much as I do miss my own bed and a lazy evening just watching some television, I am feeling so sad to be going. Plans are being made for a future visit, I know, and so I am just going to try and be in the moment and enjoy a day made up of miscellaneous things that we couldn’t fit elsewhere.