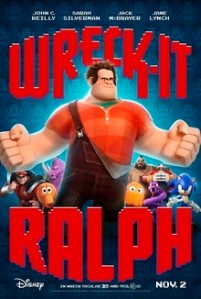 Over the course of watching the Disney Animated Canon there is a question that kept on coming into my head: what makes a Disney movie? Given that this is a studio rather than a single director or group of directors, this isn’t an easy question to answer because the answer keeps changing throughout their history. With John Lasseter at the helm of the studio and Rich Moore handling the script, Wreck-It Ralph may be the first time that a main Disney animated release felt out of place with its immediate surroundings – and that worked in its favour.

Let’s not mince words, Wreck-It Ralph feels like what you get when you cross the geekiness of Futurama with the motion picture making of Pixar. This is a compliment given how I watched some of my Futurama DVDs so much that they broke. The extreme attention to detail, the number of background references and the winking reverence to the world of video games set this apart from pretty much anything Disney ever made and was the reason that I got drawn fully back into their world after a few years dipping my toe in here and there.

They also managed to do the impossible, make a great video game movie. Sure, this isn’t a real video game, but I think that it should count given that the background characters are pretty much all from different games from Street Fighter to Sonic the Hedgehog it counts. I mean, the main character is essentially a plaid-wearing Donkey Kong after all. It’s also worth noting how, in order to make this work as a video game movie, they really play with the level and style of graphics, which means that the more recent games are more realistic looking than those meant to be from the 1980s.

I also think I would be remiss if I didn’t single out the performances of Alan Tudyk and Sarah Silverman. Tudyk’s candy king is like Alice in Wonderland‘s Mad Hatter played with a malevolent streak and Silverman… the break in her voice as she screams when Ralph smashes her car has brought tears to my eyes every time that I’ve seen that scene. You also have Jane Lynch and Jack McBrayer playing pretty much the same character that we’ve seen from them many times before, but that’s not a bad thing and explains why they’re able to just deliver when needed.

Next on the list is the big one. The film that launched a thousand memes and became such a huge cultural tour de force that it became a bit much to deal with. That’s right, it’ll be time to ‘Let It Go’ as I re-watch Frozen a few months ahead of the sequel’s release in the cinema.