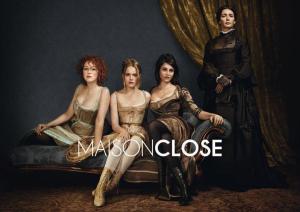 You know that thing where you read up on a TV series and think that this could be perfect for you, only to be proven wrong within ten minutes? That pretty much sums up my experience with Maison Close. This series, set in an upmarket Parisian brothel just after the Revolution, pretty much has the synopsis of something that should have kept me interested for both seasons and yet it ended up being such a. Chore to watch. So, what went wrong?

Well, the fact that something with such an interesting premise ended up being cancelled just after two seasons should have been a bit of a red light. Then again, you get shows like Firefly and Pushing Daisies which buck the trend on that so you cannot just go on that. If anything, it would appear that it got the second season because so many international channels started showing it based on the synopsis alone, so as long as it was paying its way Masison Close wasn’t going to go homeless.

The thing is, this show fell into the trap that a lot of TV shows and films end up stumbling into – focussing so much of the efforts into shock factor and not into creating characters you can cheer for. Hell, I read that this is meant to be a dark comedy, but it’s hard to have a subversive chuckle when a woman is sold against her will, brutally raped and then has to find solace in a newfound addiction to heroin. All while the police enable this enslavement by threatening to have her fiancé shot unless she goes along with it.

There’s just so much bleakness and little hope that it just becomes such an ordeal to watch that, if I didn’t have to watch this for the blog, I probably would have ended up switching off part-way through the second episode and not given it a moment’s thought otherwise. Where something like Heartbreak High was at least teen-focused I could forgive a number of sins, but this was aimed at someone like me and it was a complete miss. At least it’s one of the foreign shows crossed off, makes me feel less guilty for picking a game show for the next entry.