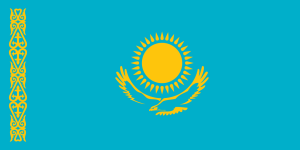 Today was a rare Sunday, one where I had the entire morning to myself. On the one hand, I could have use this time to watch a truckload of my new favourite anime. Me being me, I instead fast-tracked a recipe that I knew would need a fair bit of time and care if I was going to be able to have it for lunch. Maybe the next time I need to make something from Asia I’ll get back to the original recipe I had in mind, but for now – let’s have a look at the food of Kazakhstan.

Kazakhstan is the second central Asian nation that I have cooked for (the first being Turkmenistan). I didn’t go too far into what cuisine looks like in this region when I was last making food, so I want to make up for it today. Prior to their takeover by Russia, Kazakhstan had a culture going back thousands of years and was centred around the animals that the early farmers could rear for meat: horse, camel, cow and sheep. This means, when looking up recipes for Kazakh food, a lot of recipes were finding ways to take a traditionally horse-based recipe and translate it into a meat that could be found more easily in English-speaking countries. As I have mentioned before, I have little to no qualms around eating horse and actually quite like it, but such is the culture in Britain that horsemeat is taboo.

The dish that have chosen to make today is one of those dishes that could be made with horse or with horse and mutton. It’s allegedly one of the most popular dishes in Kazakhstan and has variants in neighbouring Kyrgyzstan and Uzbekistan. I’ll get to those countries eventually, but for now let’s enjoy a fairly labour-intensive Kazakh dish.

Two things before I get started, the recipe for this (from the defunct Pinch of Cinnamon blog) adds in some potato when there isn’t usually any. I kept this in because, well, I like potato. She also talked about using a traditional horsemeat sausage where available, I sadly couldn’t find a place that carried Kazakh horse sausage so had to go without.

The rest of the dish, however, I did as much from scratch as possible. So in this bowl you have a sauce made from homemade lamb stock and onions, tender pieces of lamb, some vegetables (carrots and potatoes) and freshly made square noodles which incorporates the same lamb stock as the sauce. Have I ever made my own noodles (or pasta) before? No. Is it something that’s my bucket list? Oh yes it is. 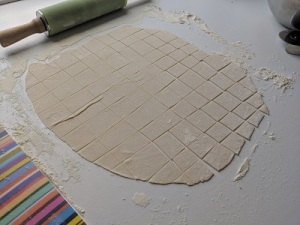 In-keeping with the them of being as kinda authentic as possible, I wanted to use this as an opportunity to make my own pasta – albeit a simple pasta. The beshbarmak relies on there being a lot of noodles and the type of noodle, whilst it can vary, tends to be a thin rectangular kind. I don’t have any pasta making paraphernalia, so everything was done with a rolling pin, a knife and a lot of flour. The process for making this type of noodle was a lot simpler than I had first expected, so I might try this out again at some point and make my own for when I eventually get around to China.

Time for a return trip to the world of European cooking, or at least that’s what the stats tell me. I’ve still got a recipe for Kyrgyzstan that is tempting me, so I might feel the need to get that done as a priority. Else, I think I want to doing something Eastern European – maybe making the most of the number of berries that are still available in the supermarkets… I think I have a good idea of something that might work for that if I see a good special offer.