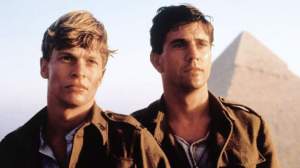 Before starting on the post proper, I want to start with this statement: the final 20 minutes of Gallipoli are exceptional. When I have talked to people about this film, the memories that people tend to have of Gallipoli is the climactic final section rather than the 90 minutes that preceded it. It is this ending that propels this film and makes it worth watching, most of the stuff beforehand, not so much.

I don’t know what it was with the early 1980s with runners as principal characters and running sequences set to electronic music that is not at all in keeping with the time period. Sure, maybe this is more of a coincidence because it’s only Gallipoli and Chariots of Fire that come to mind, but it is such an oddly specific mood that I can only wonder what would have spurred this on.

In any event, along with Mad Max, Gallipoli is one of the more successful films released in the Australian New Wave period. It’s technically a war film, although the war itself doesn’t appear much until the final half hour, so it mostly plays as a prelude to combat which is cut short because of the futility of trench warfare in World War One. For most of the prelude, we have a number of sequences showing the budding friendship between two young champion runners who volunteer for enlistment – one lying about his age and the other because he’s pretty much strong-armed into it.

Gallipoli’s identity as an anti-war film only comes into focus in the exceptional final 20 minutes where all innocence and bravado is lost and suddenly the grim realisation of imminent death is abound. Given the cockiness of the previous hour and a half, it makes for a stark contrast that serves to deepen the sense of dread you feel in the final sequence. It’s powerful stuff, but I wish that the road I saw them travelling on the way was less travelled by other (and probably better) war films.

It’s not that Gallipoli is a bad film, it’s just that it feels a bit lop-sided as war films go.  Maybe it was done this way as to properly illustrate the disconnect between the realities of war and the expectations of the soldiers that went to it with their arms outstretched and their heads turned in the direction of propaganda and blind nationalism – but I wish this dichotomy was more obvious when watching it as that would have made the first hour feel less superfluous and more necessary to the overall vision.