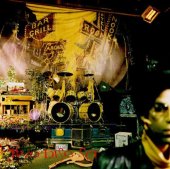 It’s been nearly 6 years since I started this blog and this album list and I have finally reached album 200. Considering that I pretty much spend 6-7 hours a say with some sort of headphones, it’s taken me a touch too long to get to this point. Similarly, it’s been 3 years since I covered a Prince album on this blog… which is just plain ridiculous.

Of the three Prince albums within the Top 250 (the other two being 1999 and Purple Rain) Sign ‘O’ The Times is both his highest placed in this list as well as being the longest of bunch. It might also be the most diverse that I have heard him being on one album, which isn’t something you can say too lightly about Prince. It begins with a very contemporary socially conscious song (which mentions things like the Challenger explosion and the AIDS crisis) and ends in a soulful slow jam.

Despite being a long album at 80 minutes, it’s actually quite difficult to say that he padded it out with too many filler songs. Instead you have songs that go from the quite good to the excellent. I’m not sure if, for me, there’s a song that ascends to the heights of ‘When Doves Cry’ but that might just be a familiarity thing more than anything.

The song that probably hit me the hardest on the first listen was ‘Housequake’ as Prince is a whole lot of fun at his funkiest. There was also ‘I Could Never Be Your Man’, which probably hit because of how much I love a song that fits into the “dancing with tears in your eyes” genre. I was also impressed at the live backing vocals provided by the concert goers in ‘It’s Gonna Be a Beautiful Night’, but that was more the scale than anything to do with the actual song. On further listens, ‘Hot Thing’ and ‘Starfish and Coffee’ also really started to stand out.

It breaks my heart a bit that this is the last Prince album on the list, but what a way to finish off an artist. This is one of those people whose back catalog is so immense that I’ve been a bit reluctant to make a start because who knows how long it would take to investigate. Now that I’ve heard Sign ‘O’ The Times I think this would be a really worthwhile endeavour.

So, any advice on the best way to proceed would be greatly appreciated.