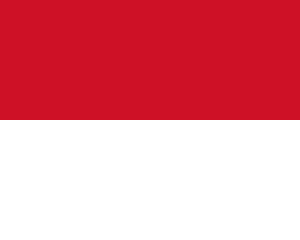 So I managed to find the chard, which has allowed me to cross off another one of the European micro-nations. Honestly, at this point I’m using these smaller countries to whittle down the type of dishes I am going to cook for the neighbouring nation. Since France is such a culinary giant with a lot of different named cuisine types, Monaco is really helping me out here.

Being on the Mediterranean coast surrounded by the south of France, the food on offer contains a lot of seafood and is essentially an offshoot of nearby French cuisine. With Italy not too far away to the East, there are also some Italian influences here. As with Liechtenstein and San Marino, the research was more difficult compared to other European nations… but still easier than some of the Oceanian countries. 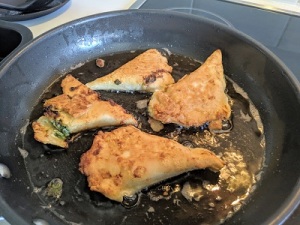 The only thing I could find that came close to being a Monegasque national dish were these fried pastries filled with a mix of chard and cheese. Since I was doing a bunch of other things in order to make the dessert (and that I prefer my savoury pastries to be on the larger side) I opted to make 4 bigger ones rather than 12 smaller ones. Well, I did try to make a more traditionally sized one – but it just disappeared down my throat without touching the sides, so I’m glad that I made them like this.

For the pastry and the filling, I followed this recipe from A Year Cooking The World who managed to take a far more aestically pleasing photo than me. This really is the by-product of doing the whole intermittent fasting thing – by 2pm I’m getting hangry and would rather eat the hot food than search for non-existent lighting in my kitchen.

If chard is out of season, this really would work with spinach instead. The pairing of spinach and ricotta is a well known and celebrated one, which would taste great in these pastries. It would lack the slight bitterness of the chard though… 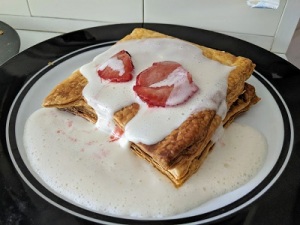 Right… so this was pretty much a train wreck. This might be the by-product of my using low fat ingredients to make a decadent dessert, the heat-wave or my lack of experience of making dessert pastries… but I’m actually embarrassed to post this and was seriously considering just omitting it from the post.

The positives of the dish were the roasted strawberries and the taste of the mascarpone cream. However, the cream just did not set and I think low-fat puff pastry just may not be for me. Looking at the picture from the recipe, whose name comes from the Monegasque monarch who loves it, this should have been a thing of beauty rather than an audition to meet Nicole Byer on the set of Nailed It. Oh well, it’s been a very long time since a recipe went this wrong on me, so I guess it was about time.

I believe the phrase ‘next time in Jerusalem’ would be relevant here. Thanks to the kosher section of a nearby supermarket’, I have been able to procure stuff to make Israel my next nation. Hopefully this will go a darn sight better than it did today…