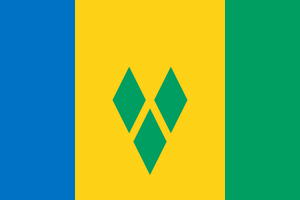 Well I found the ingredients, so I’ll be able to cook something for the nation that comes after Malawi in the M.I.A. song ‘Matangi‘ (where she lists a bunch of countries). Since Trinidad is next on that list, and statistically my next move is to Europe, I’ll be leaving her list there. Still though, it was a cool way to get inspiration for this post.

Saint Vincent and the Grenadines are a chain of islands in the south of the Caribbean sea; the Grenadines themselves the northern half of a small group of islands, the southern half being claimed by Grenada. The majority of the population live on the main north island of Saint Vincent,  which is to the south of Saint Lucia.  Given how many island nations are in this part of the world, I figured it could be helpful to give an idea of where it is in relation to other nations.

In terms of cuisine, like Saint Lucia to the north, Saint Vincent and the Grenadines makes use of what they are able to grow on the islands and catch in the surrounding seas. One of the more interesting ingredients that I see coming up in a lot of their food is breadfruit – whose name pretty much speaks for itself. The rest of the cuisine pretty much conforms to the general Caribbean tradition which is rooted in years of trading and contact with neighbouring areas as well as those of the major colonial powers. 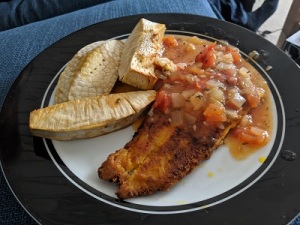 The national dish of Saint Vincent and the Grenadines is breadfruit and fried jackfish. Could I find jackfish? No I could not and, to be honest, if I did I can imagine that the mark-up would be something horrendous. Luckily though, I was able to order myself a few tins of breadfruit (and a tin of jackfruit for dessert) in order to make this recipe as close to the one from the nation’s own consulate.

Now, I have never had breadfruit before so I had no idea what to really expect. Fresh from the oven, they looked like calcified grapefruit slices – which is incredibly far from what they tasted like. The name comes from the fact that these are meant to have a taste not unlike bread. I kinda got that, but it reminded me more of the taro from many years ago. I’ve got more breadfruit for other Caribbean nations and will not be unhappy to cook that again.

The seasoning of the fish, as well as the sauce, was exceptional. I am not usually one for frying fish, but I think I could be a convert with this recipe. The red palm oil I used to fry the fish helped to make it aesthetically pleasing by giving it a brick-red colour – luckily this didn’t overpower the seasoning.

Like I said earlier, it’s back to Europe for the next country. Since I did Greece last time, I thought it would be a good idea to do one of the micro-nations. Therefore, if I am able to find a source of chard, I will be cooking for Monaco. If I can’t find any… well I guess it’ll be time for me to dig up something for Andorra.