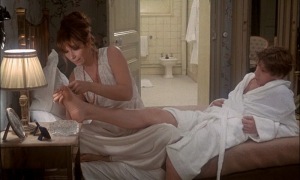 For some, probably unsurprising, reason I got this film confused with the 2005 French film The Beat That My Heart Skipped so started out expecting something a bit more crime drama and a little less 1950s French Oedipus. Still, that’s the way the cookie crumbles so it’s time to talk about Murmur of the Heart.

Ignoring the Oedipus comment for now, let’s go into some light background. Murmur of the Heart is a French coming-of-age film set in 1950s Dijon. Laurent, the protagonist, is a 14-year-old boy and the youngest of three rebellious brothers. He’s the brightest of them all as well as being the most sensitive and an all round mummy’s boy (hold your horses we’ll get to the Oedipal stuff later).

In the first half of the film, we see Laurent starting on his road to sexual maturity. His older brothers are already sexually active and are very open about their sexuality with each other. There’s even a scene where all three drop their underwear and compare measurements and we hear about a time where Laurent masturbated with one of his brothers (he reveals this during confession with the priest at school).

His brothers needle him and his virginity to the point that they take him to a brothel so he can lose it that way… for them to burst in drunk and prevent him from losing it entirely. It’s at this point where he gets ill with scarlet fever and we enter the second half of the film where an sexually frustrated Laurent sharing a room at a sanatorium with his sexy Italian mother.

Right, so it’s really hard to not talk about this film without addressing the incestuous elephant in the room.  Writing this post made me realize that, thanks to his brothers interruption, not only do we witness incest but also Laurent losing his virginity to his mother. Also, neither of them are actually repulsed afterwards – instead she talks about it as being a tender memory for them to keep secret. It’s so problematic and yet Malle makes the whole thing feel incredibly inevitable.

Even taking the incest taboo into account (which we’re fine with when watching Game of Thrones) Murmur of the Heart is a really good coming of age film that has been beautifully shot and scripted. It’s little wonder that Wes Anderson took inspiration from this, I mean you can see how this would have influenced The Royal Tenenbaums. It has some problems with an elongated second half, but it’s all to get us to the…ummm… main event.