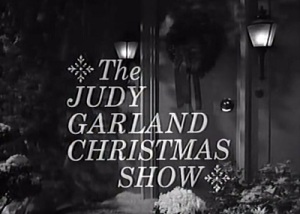 Well, it has been a ridiculously long time since I last crossed a show off of the 1001 TV shows list. I guess that’s what happens when you catch up on 4 years of Brooklyn Nine-Nine and finally get around to seeing the third season of Twin Peaks. Anyway, the bucket decreed that the next show to be watched was The Judy Garland Show – so I did.

As you may have noticed from the number of episodes, The Judy Garland Show is one of those one season wonders that has gained extra popularity in the years since its cancellation. In fact it’s probably more accurate to think of this as three separate shows when you consider the amount of re-tooling that it went through during its brief time on television.

In essence, The Judy Garland Show is an old school variety show with Judy Garland as the host and a number of guests who come on to sing, dance or do comedic bits. As with all variety shows, the quality of the segments really do depend on the guests themselves – meaning that the likes of Barbra Streisand shine whereas any of Jerry Van Dyke’s solo bits just fall flat.

Actually, let’s talk about Jerry Van Dyke. I am not necessarily saying that the material was completely his fault, but in his initial role as the pseudo-co-host the only thing that he seems to do is insult Judy Garland and do that cringey soft punch thing to her face whilst being generally condescending. As someone who has never considered himself a Judy Garland fan, I was so uncomfortable seeing this and was so glad to see when he had been excised from the show altogether.

Sadly though the damage was done. This initial stupid idea to mock Judy Garland rather than allow her to bring her big screen magic to the television meant that this show was never going to last. It’s a crying shame that they didn’t just allow her to shine as we know she can (and also have this as a lower budget half-hour show) because she lit up every segment she was in.

My favourite segments of this show pretty much all contained her on her own with her trunk of memories as she told stories about her life and then breaks into a final song. In the end, it’s those moments that justify the price of admission and what made me keep watching the episodes. She was such a talent and I’m glad that I’ve had the chance to see more of that where she’s playing some version of herself – as that person is someone where I can understand whole communities falling for.