Spring has truly sprung, which can only mean one thing – a holiday in the middle of March so I can use my carried over vacation days before they lapse. Previous destinations of this weird happenstance have included Singapore, Barcelona and now Paris. Despite it basically being on the doorstep thanks to the Eurostar, I’ve not done a proper Paris trip since I was 6 or 7… even then I think it was just one day I actual Paris (then again I don’t actually remember this trip). Seeing how myself and the hub recently hit 10 years together, now felt like the perfect time to do Paris properly.

An early and breakfastless trip on the Eurostar (thanks lack of food at Ebbsfleet station) can leave you feeling a little blue and a bit jittery. Boy, can those feeling be alleviated by that first glimpse of Paris as you come out of the metro. Now, I, staying near Les Halles station, so this is one of the nicer parts of the city, but damn this is a beautiful neighbourhood. Blue skies and sunshine lighting up the distinctive Parisian limestone buildings help too.

We freshened up at the hotel and started making our way towards Île de la Cité, but first it was time for lunch.

Nothing quite says ‘welcome to Paris’ like sitting on a table of a Seine-adjacent restaurant with a faint vision of the Eiffel Tower in the distance. For my first Parisian meal I had steak hache (which my French teacher used to describe as “poor man’s steak, rich man’s hamburger”) with frites and for dessert, a caramel custard.

Living in the UK, I always forget that free bread is a standard in many European nations. Of course, this is France, which means that the free bread is really nice French bread that is better than most of the bread you get in the UK. Then again, I do find it hard to think of food that the UK does best, so bemoaning the bread is probably a moot point by now.

From here we crossed over to Île de la Cité, spied our first protest (after all, this is France) and got to crossing off the first of five Lonely Planet sights off of the list.

Note: This post was originally written at the end of March, a few weeks before the fire that destroyed large sections of Notre Dame. Looking back, I can’t quite believe I managed to see it before this happened. Goes to show that you should visit these places of interest, even if they are close by, as they may not be there forever.

I don’t know how many times I’ve seen Notre Dame in media. It’s everything from Quasimodo’s home to the place where Amelie’s mother dies in a freak accident involving a suicidal tourist. As much as I was wowed by the massive double bell towers, what I was not prepared for was the incredible wealth of detail in the carvings and sculpture on the exterior.

Of course we went inside, it’s free and is one of the essential Parisian sites. Sadly, being a Friday in Lent, we were there during a Mass. This meant that we couldn’t get a proper look at the main Rose window because of all the worshippers lining up to receive a blessing, but we still had access to all the other areas of the church. It really is a beautiful and huge Gothic building with some beautiful pieces of stained glass. The way that the light shined through the glass and began to colour the interior really reminded me of a less audacious version of the Sagrada Familia. 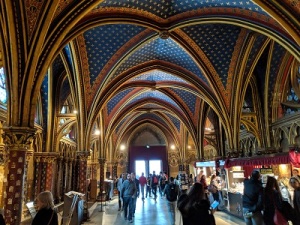 Whilst Notre Dame was beautiful, it did not take my breath away like the Saint-Chapelle did. It’s a 13th century church built within the Palace of Justice that may rank as one of the most awe inspiring places of worship that I have ever been inside. The lower chapel has beautiful blue and gold ceilings with painted columns and some stipend glass. This alone made me think that the Saint-Chapelle was a must-recommend. Then you go upstairs… 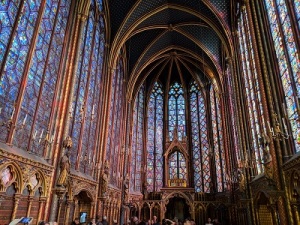 I have never seen so much stained glass in my life. The only phrase that I can think to describe it is “a splashgasm of stained glass”, which is kinda gross and I don’t think ‘splashgasm’ is a word. So often you spend money to enter a church and it feels a bit like a write-off because these buildings need to be supported – but the 10€ I spent on these tickets was definitely worth it. Go here!

Once I recovered from the splashgasm, we went north and circled round so that we could cross the Seine using the iconic Pont Neuf – so famous because of just how old it is. Also, it’s a pretty bridge that gives you some beautiful views of the Conciergerie and other buildings along the river.

We walked a bit more around the island, where we came across a lot if locals playing pétanque, and made our way to the southern bank of the river. Because of how lovely the weather was, we had a nice long walk along the river before having a nice sit and chat as we watched the boats go by. I guess things are a cliche for a reason, like the seemingly impromptu tango dancing group that were having fun on one of the riverside outcrops.

Around the Austerlitz bridge, we left the riverside to have a brief walk through the Jardin Des Plantes. It’s a lovely free garden next to the Natural History Museum and the Menagerie. Not a lot of the garden was in bloom, but the small bits that were had crowds of excited Parisians around them taking photos. Considering some of the stereotypes people have of Parisians, this was such a cute thing to see… then again I started acting like them when I saw the beautiful poppies that were blooming.

This brought an end to the main part of the day because we had tickets to see an opera out in the suburb of Bobigny. We grabbed some Orangina and a ham-cheese croissant for a quick dinner to eat in the nearby park… which was nice until someone came over and asked if we were in the market for some cocaine or some meth. Takes all sorts I guess.

Since the opera is part of the classical list, I am going to cover it in a separate post like I did with Spartacus. This, therefore brings me to the end of the first day in Paris. Aside from being offered drugs, this has been a really great first day and I am so looks forward to seeing what the next five days are going to bring. It’s nearly 1 am, so it’s time to sign off.